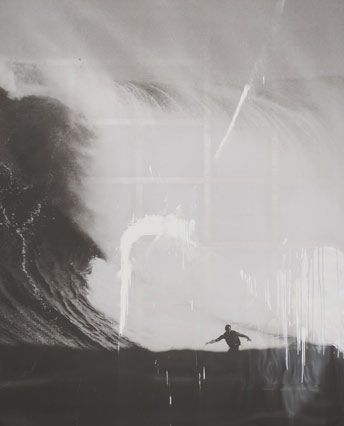 Painting for Malik Joyeux and Bernardo Bertolucci (V) (2006) belongs to a series of Surf Paintings. Schnabel used black and white photographs as the basis for his paintings to which he added gestural strokes painted in soluble gesso and ink. The giant photograph depicts a surfer catching a monster wave at the Banzai Pipeline off Oahu in Hawaii. In Painting for Malik Joyeux and Bernardo Bertolucci (V), water is both the subject and the material of the painting. The gestural white mark created with gesso is then partially washed off with a hose, which creates this type of unique dripping effect. The enormous canvas (609.6x457.2 cm) amplifies the wave and makes the viewers feel like they are inside it. It is also the purpose of the white mark; with his gestural strokes, Schnabel echoes the photographic image of the wave.

The title suggests Schnabel’s admiration for two figures: the Tahitian Big Wave surfer Malik Joyeux, who tragically died in a surfing accident in 2005 at the Oahu Pipeline in Hawaii, and the Italian film director Bernardo Bertolucci. More broadly, the series combined Schanbel’s two passions, film, and surfing. For Schnabel, the ocean and the sea are essential, and water, in general, is a noticeable element in his art: in paintings such as The Sea (1981) and Affection for Surfing (1983), and his films. From his youth, Schnabel became immersed in surf culture, and later, he chose to live and paint in Montauk, New York - a place where he can surf and always be close to the water.

Schnabel watched Bertolucci’s movies in the 1970s while living in Europe. His painting Giacomo Expelled from the Temple (1976-1978), located in the Los Angeles Museum of Contemporary Art (MOCA), was first called Restaurant Painting for Bernardo. Schnabel initially connected the painting to Bertolluci since the warm light of his films inspired the artist. Years later, Schnabel met Bertolucci, and the two became close friends. According to Schnabel, the concept of the series came about from his conversations with Bertolucci, who at the time was worried about his health and his ability to continue making films. Schnabel found that there is a parallel between surfing and creating art, the physical struggle and pain involved with surfing ultimately are done for the extraordinary sensation of being in the wave. This feeling is a kind of transcendence in which one is relieved of everything ordinary and familiar. Schnabel wanted to send this message of encouragement to Bertolucci, whose motivation for making movies was to put forward something from within that goes beyond physical limitations. Painting for Malik Joyeux and Bernardo Bertolucci (V) (2006) brings together two unlikely figures. In dedicating the series to Joyeux and Bertolucci, Schnabel made a connection between two individuals that never had an opportunity to meet. It illustrated the power of art to make a connection between people that could not happen in reality.