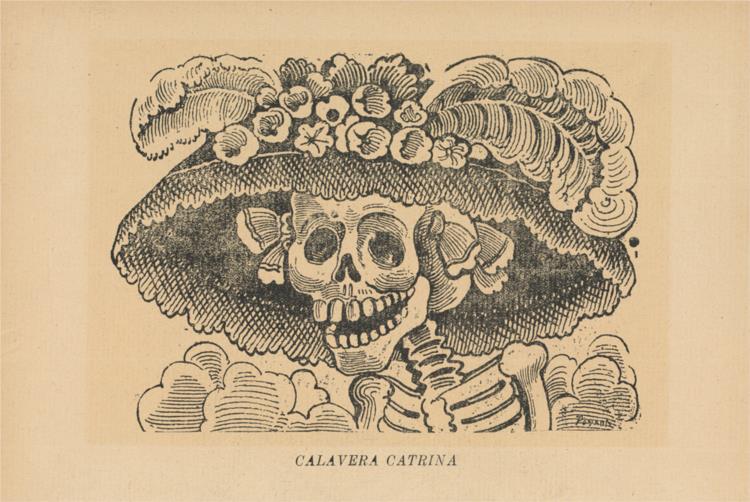 La Calavera Catrina ('Dapper Skeleton', 'Elegant Skull') is a 1910–1913 zinc etching by the Mexican printmaker, cartoon illustrator and lithographer José Guadalupe Posada. The image depicts a female skeleton dressed only in a hat, her chapeau en attende is related to European styles of the early 20th century. She is offered as a satirical portrait of those Mexican natives who, Posada felt, were aspiring to adopt European aristocratic traditions in the pre-revolution era. She, in particular, has become an icon of the Mexican Día de Muertos, or Day of the Dead called La Calavera Garbancera, the etching was created sometime between 1910 and 1913 by José Guadalupe Posada as a broadside, and was published from the original plates in 1930 by Frances Toor, Blas Vanegas Arroyo and Pablo O'Higgiafia: Las Obras de José Guadalupe Posada, Grabador Mexicano. Calavera (Dapper Skeleton). This image can be found on plate 21 of Posada's Popular Mexican Prints.


The image made from zinc etching captures the famous calaveras or skull/skeleton image that had become popular at the turn of the 20th century. The original leaflet describes a person who was ashamed of his/her indigenous origins and dressed imitating the French style while wearing lots of makeup to make his/her skin look whiter. This description also ties to the original name garbancera, which became a nickname given to people of indigenous ancestry who imitated European style and denied their own cultural heritage.


"La Catrina has become the referential image of Death in Mexico, it is common to see her embodied as part of the celebrations of Day of the Dead throughout the country; she has become a motive for the creation of handcrafts made from clay or other materials, her representations may vary, as well as the hat." – J.G. Posada


While the original work by Posada introduced the character, the popularity of La Calavera as well as her name is derived from a work by artist Diego Rivera in his 1947 completed mural Sueño de una Tarde Dominical en la Alameda Central (Dream of a Sunday afternoon along Central Alameda).


Rivera's mural was painted between the years 1946 and 1947, and is the principal work of the "Museo Mural Diego Rivera" adjacent to the Alameda in the historic center of Mexico City. It measures 15 meters long and it stood at the end of Alameda Park. The mural survived the 1985 earthquake, which destroyed the hotel, and was later moved across the street to the Museo Mural Diego Rivera, built after the earthquake for the purpose of housing and displaying Rivera's restored mural.


Rivera's mural depicts a culmination of 400 years of Mexico's major figures, which include himself, Posada, and his wife Frida Kahlo. Rivera took inspiration from the original etching and gave Calavera a body as well as more of an identity in her elegant outfit as she is poised between himself and Posada. The intent seemed to be to show the tradition of welcoming and comfort the Mexicans have with death and especially the identity of a Lady of the Dead, harking back to the heritage of the Aztec goddess Mictecacihuatl. As explained by curator David de la Torre from the LA Plaza de Cultura y Artes, a Mexican-American museum and cultural center in Los Angeles, California, US, Catrina has come to symbolize not only Día de Muertos and the Mexican willingness to laugh at death itself, but originally Catrina was an elegant or well-dressed woman, so it refers to rich people, de la Torre said. "Death brings this neutralizing force; everyone is equal in the end. Sometimes people have to be reminded of that."