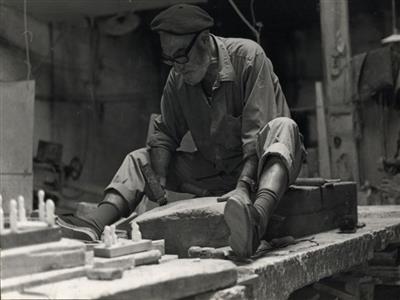 Jorge Oteiza Enbil (October 21, 1908 – April 9, 2003), was a Basque Spanish sculptor, painter, designer and writer, renowned for being one of the main theorists on Basque modern art. Oteiza was born in Orio (Gipuzkoa). He moved to South America in 1935, just before the Spanish Civil War, and stayed there for 14 years. In 1963 he published Quosque tandem!, an essay about the aesthetics inherent to Basque soul, based on Basque prehistoric art and Basque people's anthropological roots. Three years on, he contributed to found the artistic group Gaur.

He died in San Sebastián, Gipuzkoa, in 2003. Following his will, a month after his death a museum dedicated to his career was opened in Alzuza, Navarre, in the place where he had lived since 1975. The Oteiza Museum is a monographic exhibition space housing the personal collection of Jorge Oteiza, which includes 1,690 sculptures, 2,000 experimental pieces from the artist’s Chalk Laboratory, and an extensive collection of drawings and collages.

Jorge Oteiza was granted several prizes and awards throughout his life: