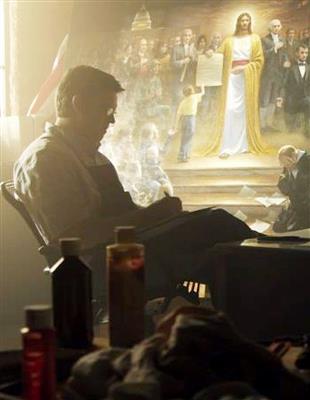 McNaughton was born and raised in Mesa, Arizona. His family moved to Utah when he was 14, and McNaughton studied art on scholarship at Brigham Young University. He switched from the art department to the design department in order to skirt modernist leanings and trend toward classical training. He graduated with a BFA in Design with an emphasis on Illustration. He has enhanced his skills by studying the masters and engaging in pure practice out in nature. He paints using a method called French Barbizon Impressionism, a school of style popular from about 1830 to 1875, which influenced many of the most famous impressionists. It is named after a town south of Paris. The technique employs subtle tones and colors, with softness in the landscapes portrayed. Few people today are painting using this technique, and McNaughton is considered by some to be the premiere French Barbizon Impressionist.

The Forgotten Man is a 2010 painting by the American artist Jon McNaughton. It depicts President Barack Obama standing in front of the White House. The subject matter of the painting was inspired by the passage of the Affordable Care Act. McNaughton unveiled the painting in a YouTube video on September 14, 2010. It was the second in a series of politically charged portraits painted by McNaughton.


The 43 men who as of 2010 had served as President of the United States are gathered in a park in front of the White House, above which the American flag can be seen, at half mast. In general, the 18th and 19th century presidents are on the left, the later ones on the right, some appear lost in thought while others, Bill Clinton and the two Roosevelts, are applauding. The only non-president in the painting is a young white man, who sits alone on a park bench, hunched over in despair, contemplating his future. Some of the presidents, including Washington, Jefferson, Lincoln and Reagan reach out to him, while looking toward Barack Obama who stands in the foreground right. James Madison, the Father of the Constitution, is outraged by Obama's actions, for beneath Obama's foot is the U.S. Constitution. Scattered on the ground are dollar bills, laws and amendments that form part of the Bill of Rights.


The painting gained initial notoriety in 2010 when it was featured on MSNBC television host Rachel Maddow's blog as part of a caption contest. In 2012, it drew satirical praise during an episode of The Colbert Report from Stephen Colbert's conservative persona.


After being purchased by conservative commentator Sean Hannity in 2016, The Forgotten Man was rumored to have been bought as a gift for then President-elect Donald Trump, though a spokesperson for Fox News (Hannity's employer) later clarified that the painting was never intended to be given as a gift.


The painting has drawn comparisons to a 1934 Maynard Dixon painting of the same name.