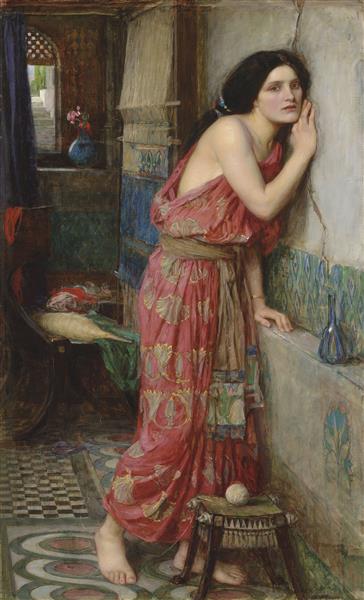 Thisbe (1909) depicts a scene from the story of Thisbe and Pyramus, which is part of Ovid’s Metamorphoses. Set in ancient Babylon, Thisbe, a beautiful maiden, falls in love with her neighbor Pyramus, but the two are kept apart by their families, who are bitter rivals and will not allow them to wed. The young lovers use a crack in a wall shared by their families’ homes to communicate with one another: they profess their love and arrange a meeting near Ninus’s tomb. However, a series of tragic circumstances unfold, Thisbe arrives first. After seeing a lioness approach, she runs away leaving her veil behind. Pyramus arrives later, and wrongly assuming Thisbe fell prey to the lioness, he kills himself by falling on his sword. Thisbe returns to find Pyramus’s body under a mulberry tree. In her grief, she stabs herself with the same sword. It is said that the blood of the lovers seeped into the fruit of the mulberry tree, forever giving the mulberry fruit its unique red color.

The story was retold in the late 1300s by Geoffrey Chaucer in Legend of Good, and in 1595, by William Shakespeare in a scene of A Midsummer Night’s Dream, as well as his famous tragedy, Romeo and Juliet. The story of Thisbe is the type of subject that appealed to the artist: an unfulfilled love story that ends with the woman transforming to a natural form. In the same decade, he painted Echo and Narcissus (1903) – Echo dissolves into a whisper after being rejected by Narcissus, and Apollo and Daphne (1908) – Daphne turns into a laurel tree as she flees Apollo.

Thisbe and its companion painting Lamia (1909) were first exhibited at the Royal Academy in 1909, and both were well received by critics. The model, whose identity remains unknown, was a favorite of the artist appearing in the paintings Ophelia (1910) and Penelope and the Suitors (1912). In the painting, Thisbe has risen from her loom and is holding her ear to listen to Pyramus through the crack in the wall. In the artist’s time, the loom, weaving, and embroidery were associated with feminine virtue and domesticity, especially because it was believed that the Virgin Mary was embroidering. In fact, Waterhouse often depicted his heroines weaving, like in I Am Half-Sick of Shadows, Said the Lady of Shalott (1915), and Penelope and the Suitors (1912). Since the story of Thisbe is set in Babylon, Waterhouse added different Oriental elements to the painting. However, his choices were not well researched or historically accurate: the stool in the foreground and the lotuses on Thisbe’s gown are Egyptian, the window transom in the background is Islamic, the tiles lining the right wall are Ottoman and the flooring appears to be Roman. This mishmash of influences reflects Waterhouse’s broad interest in Eastern cultures, and the desire to evoke a distant past through these exotic elements.