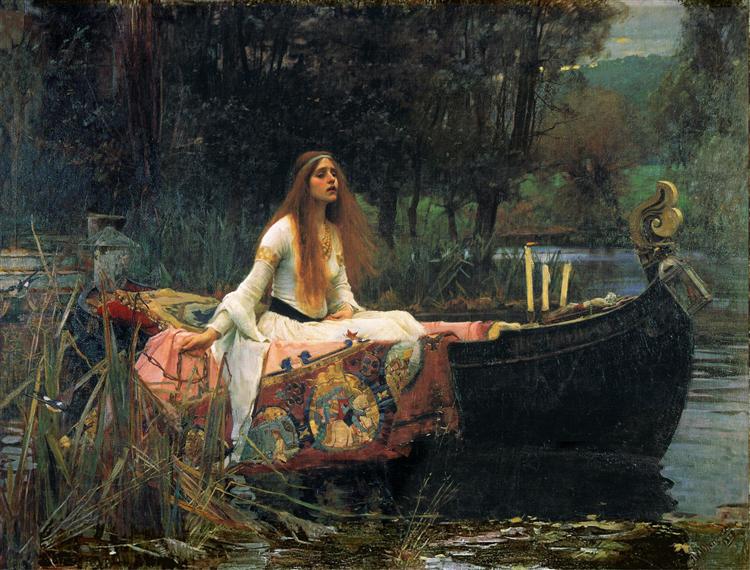 The Lady of Shalott

The Lady of Shalott (1888), one of John William Waterhouse's best-known paintings, illustrates the tragic conclusion of Alfred Tennyson’s 1832 poem The Lady of Shallot. Tennyson’s poem retells a medieval Arthurian legend about Elaine of Astolat, who died of unrequited love for Sir Lancelot. According to the legend, she was cursed in a tower near King Arthur’s Camelot. In Tennyson’s poem, the Lady of Shalott’s suffers from a curse that forbids her from leaving her tower: she sits in the tower and weaves, only allowed to look upon reality through a mirror. Defying her curse, she looks out the window and heads in a small boat to Camelot. Punished for breaking the curse, she dies before reaching her destination. Waterhouse depicts the Lady of Shalott in her final moments, as she lets go of the boat’s chain: her mouth is parted as she sings ‘her last song’. The tapestry she wove during her confinement is draped over the boat. The artist hints at her near demise: in front of her is a crucifix and next to her are three candles, two of them blown-out. Candles were often used to symbolized life, and the two blown-out candles signify that her life will end soon.

The Lady of Shalott was created during a brief period in which Waterhouse painted en plein air – a French term for painting outdoors. This likely contributed to the naturalistic depiction of the landscape. Even though the setting of the painting is unknown, it was likely painted during one of the artist’s visits to Devon or Somerset. The model was probably the artist’s wife, Esther Kenworthy Waterhouse. Some have suggested that the painting was a tribute to the painting Ophelia (1851-1852) by Pre-Raphaelite John Everett Millais. The broad impressionist brushstrokes seen in both paintings replaced the precise treatment characteristic of the earlier Pre-Raphaelite work. In Waterhouse’s sketchbook, there were many pencil sketches and studies for this painting, as well as for the later work I am Half-Sick of Shadows, said the Lady of Shalott. The Lady of Shalott was donated to the public in 1894 by Sir Henry Tate and was one of the original paintings gifted by Tate. Today it is displayed at the Tate Britain Museum in London.

The Lady of Shalott is a painting of 1888 by the English painter John William Waterhouse. It is a representation of the ending of Alfred, Lord Tennyson's 1832 poem of the same name. Waterhouse painted three different versions of this character, in 1888, 1894 and 1915. It is one of his most famous works, which adopted much of the style of the Pre-Raphaelite Brotherhood, though Waterhouse was painting several decades after the Brotherhood split up during his early childhood.

The Lady of Shalott was donated to the public by Sir Henry Tate in 1894, and is usually on display in Tate Britain, London, in room 1840.

The Lady of Shalott is one of John William Waterhouse's most famous works, an 1888 oil-on-canvas painting of a scene from Tennyson's poem in which the poet describes the plight of a young woman, loosely based on the figure of Elaine of Astolat from medieval Arthurian legend, who yearned with an unrequited love for the knight Sir Lancelot, isolated under an undisclosed curse in a tower near King Arthur's Camelot. Waterhouse painted three different versions of this character, in 1888, 1894 and 1915.

The painting has the precisely painted detail and bright colours associated with the Pre-Raphaelites. The Lady of Shalott pictures the Lady, who is the main character in Tennyson's poem, also titled The Lady of Shalott (1842), who is facing her destiny. The Lady has made her way to this small canoe with a few of her belongings. She had been confined to her quarters, not allowed to go outside or even look outdoors. "A curse is on her if she stay", wrote Tennyson. In the poem, a curse had been put on the Lady, but she defies the rules of the curse to see if she could live outside of her confinement. This is the moment that is pictured in Waterhouse's painting, as the Lady is leaving to face her destiny. She is pictured sitting on a tapestry, which showcases Waterhouse’s strong attention to detail.

Initially it simply appears to be a painting of a woman in a canoe-like boat, but the painting is filled with significant detail that amplifies the meaning. The Lady has a lantern at the front of her boat; in the poem by Tennyson and reflected in Waterhouse's image it will soon be dark. Also, with a closer look, we can see a crucifix positioned near the front of the bow, and the Lady is gazing right over it. Next to the crucifix are three candles. Candles were a representation of life – two of the candles are already blown out, signifying that her death is soon to come. Aside from the metaphoric details, this painting is valued for Waterhouse's realistic painting abilities. Her dress is stark white against the much darker hues of the background. Waterhouse's close attention to detail and colour, accentuation of the beauty of nature, realist quality, and his interpretation of a vulnerable, yearning woman are further representative of his artistic skill.

The Lady of Shalott was donated to the public by Sir Henry Tate in 1894.