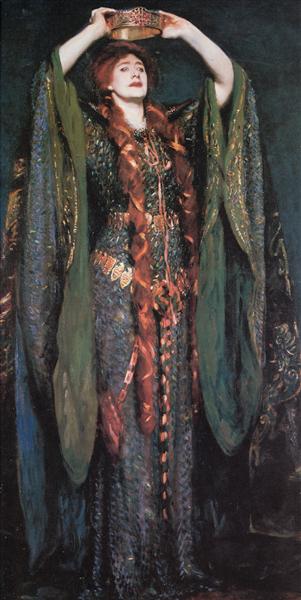 The famed Shakespearean actress Dame Alice Ellen Terry is the subject of John Singer Sargent’s portrait Ellen Terry as Lady Macbeth (1889). Terry came from a family of well-known actors and became the leading Shakespearean actress in Britain. From 1878, she became the leading lady of the Henry Irving company, and over the next two decades, she and Irving achieved great success touring in Britain and the United States.

The painting shows Terry in her famous role of Lady Macbeth that she played in Irving’s production of Macbeth at the Lyceum Theatre in London. Sargent saw the first performance on December 29, 1888, and was immediately drawn to the actress’s costume and performance. Even though Terry was hesitant to sit for the artist until she was more certain of the play's success, it seems she began posing for the portrait shortly after their initial encounter. This is confirmed by Sargent in a letter he wrote on January 1, 1889, where he mentioned the poor lighting that slowed down his progress.

The pose in the painting was Sargent’s innovation: Lady Macbeth holds up the royal crown that she is about to place on her head. This scene does not appear in the play, and there is no evidence that the dramatic pose was part of Irving’s production of Macbeth. The pose is indicative of Lady Macbeth’s intoxication with power, and Terry’s expressive qualities as an actress: her eyes are glazed and ecstatic, she is not a symbol of moderation and innocence associated with Victorian womanhood but an icon of decadence. Terry wore her Lady Macbeth costume, a gown designed by Alice Comyns Carr and made by Ada Nettleship. The lavish dress was embroidered in gold and decorated with 1,000 iridescent wings of green jewel beetles, as well as diamonds and rubies. Terry with her luscious red braids and brilliant green and blue garment resembles a queen in a Celtic legend. This was not the only time Sargent painted Terry: the grisaille sketch Ellen Terry as Lady Macbeth (1906), shows Lady Macbeth waiting to greet Duncan. Sargent created this drawing for Ellen Terry Jubilee Program in 1906.

Ellen Terry mentioned the 1889 portrait in her Memories recalling that it was the sensation of the year. The famous author, Oscar Wilde who observed Sargent and Terry’s collaboration, wrote about Terry posing for Sargent: “The street that on a wet and dreary morning has vouchsafed the vision of Lady Macbeth in full regalia magnificently seated in a four-wheeler can never again be as other streets: it must always be full of other possibilities.” Terry also wrote that before Sargent finished the portrait, the artist Edward Burne-Jones suggested slight alterations to the coloring which Sargent accepted. Irving bought Ellen Terry as Lady Macbeth for the Beefsteak Room at the Lyceum Theatre, where it hung in an alcove. After Irving’s death in 1905, the painting was bought by Sir Joseph Joel Duveen, who donated it to the Tate Gallery in 1906.