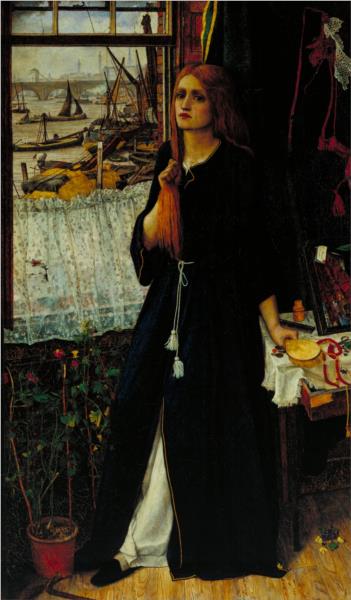 Thoughts of the Past

Thoughts of the Past, shown at the Royal Academy in 1859, was the first work exhibited by Stanhope. It belongs to the early phase of his career when he was imitating the style of the Pre-Raphaelite Brotherhood, and displays a characteristic use of strong colour. Around 1870, Stanhope turned to painting allegories inspired by the Italian Renaissance in the manner of Edward Burne-Jones (1833-98), of whom he is considered to be the most important follower.
Thoughts of the Past, a modern-life subject, was painted in the studio below that of D.G. Rossetti (1828-82) beside the Thames at Chatham Place, London. Stanhope's portrayal of a prostitute in her lodging, who is suddenly overcome with remorse for her situation, reproduces the theme of the guilt-ridden prostitute that was prevalent in literature and paintings of the 1850s and 1860s, especially among the Pre-Raphaelites and their followers. Holman Hunt's (1827-1910) The Awakening Conscience (1853-4), is another example. A study for Thoughts of the Past reveals that Stanhope had originally conceived the woman with her eyes raised skyward, as if in silent prayer, thus emphasising the idea of her repentance.
Thoughts of the Past may be viewed in terms of what the art historian Lynda Nead has identified as the 'seduction to suicide mythology', that was built around the figure of the prostitute in the nineteenth century (Nead, p.169). The interior of the room is replete with signs of a fall from virtue ; the gaudy cloak and shabby dressing table, the jewellery and money strewn across it, and the man's glove and walking stick on the floor. A number of sickly-looking plants reach up to catch the light from a window, which is open and threatens to let in a plume of black soot from outside. The view, which looks out towards Waterloo Bridge, with the Strand (a popular haunt of prostitutes) on the right, alludes to both the woman's corruption and her impending doom. The woman's red hair may associate her with images of Mary Magadalen, the archetypal prostitute. Prostitution was seen to pose a threat to the domestic core of Victorian society and representations engage in a complex language of urban filth and disease, of which the Thames, chronically polluted and stinking at the time this work was painted, was a familiar image. Death was assumed to be the only means of redemption for the prostitute and suicide by drowning, the most commonly imagined scenario, was implied through the depiction of the River and its bridges.