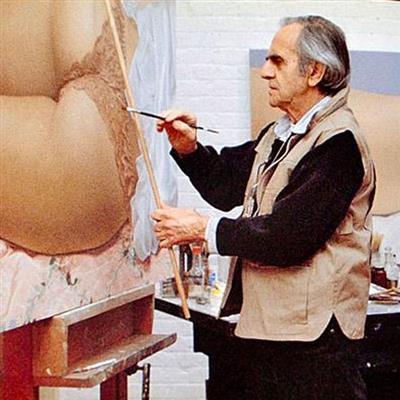 John C. Kacere (23 June 1920 — 5 August 1999) was an American artist. Originally an abstract expressionist, Kacere adopted a photorealist style in 1963. Nearly all of his photorealist paintings depict the midsection of the female body. He is considered one of the original photorealists, although he rejected the term.


Kacere painted his first photorealist painting in 1969 involving the midsection of a woman dressed in lingerie. It was over three times life size. Kacere continued this type of painting throughout the rest of his career, making it an icon of the photorealism movement. In the early 1980s, Kacere branched away from this theme and included the entire body of a woman in lingerie, but returned to his original midsection of the female body in 1988. Kacere's paintings are figurative but can be considered still lifes or even landscapes.


His paintings are in the public collections of several institutions, including the Stedelijik Museum in Amsterdam, the Portland Museum of Art, and the Speed Art Museum in Louisville, Kentucky