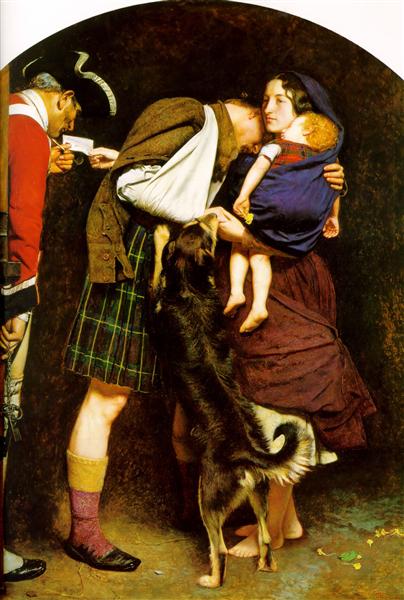 The Order of Release

The Order of Release, 1746 is a painting by John Everett Millais exhibited in 1853. It is notable for marking the beginnings of Millais's move away from the highly detailed Pre-Raphaelitism of his early years. Effie Gray, who later left her husband for the artist, modelled for the principal figure.

The painting depicts the wife of a rebel Scottish soldier, who has been imprisoned after the Jacobite rising of 1745, arriving with an order securing his release. She holds her child, showing the order to a guard, while her husband embraces her.

The Illustrated London News reviewed the painting as follows:

The dark, generalised background is a departure from the highly detailed backgrounds of earlier works such as Ophelia, as is the emphatic chiaroscuro. However, the portrayal of tense relationships disrupted by historical dramas was a continuation of the theme of A Huguenot and The Proscribed Royalist, 1651.

While working on the painting, Millais fell in love with Effie, the wife of his principal supporter, the critic John Ruskin. A study for the painting has a drawing of her head on one side and an image of a man kneeling in supplication to a woman on the other, labelled "accepted".

The title of the painting was adopted for the book The Order of Release by William Milbourne James about the love triangle, and also of a radio play about it broadcast in 1998. The painting of the picture is dramatised onstage in the play Mrs Ruskin (2003) by Kim Morrissey, and in the TV series Desperate Romantics (2009).