{{selectedLanguage.Name}}
Sign In Sign out
Action History
×
Home/ Artists / Romanticism .../ John Everett Millais/ Christ in the House of His Parents 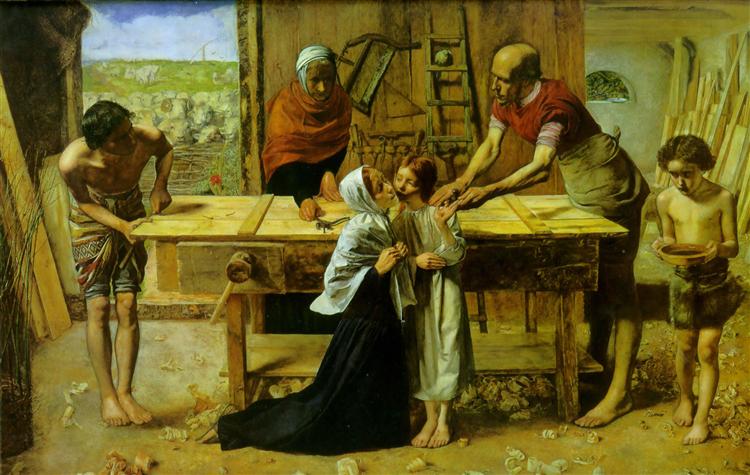 Christ in the House of His Parents

Christ in the House of His Parents (1849–50) is a painting by John Everett Millais depicting the Holy Family in Saint Joseph's carpentry workshop. The painting was extremely controversial when first exhibited, prompting many negative reviews, most notably one written by Charles Dickens. It catapulted the previously obscure Pre-Raphaelite Brotherhood to notoriety and was a major contributor to the debate about Realism in the arts.

It is currently housed in the Tate Britain in London.

The painting depicts the young Jesus assisting Joseph in his workshop. Joseph is making a door, which is laid upon his carpentry work-table. Jesus has cut his hand on an exposed nail, symbolizing the stigmata and foreshadowing Jesus' crucifixion. Some of the blood has fallen onto his foot. As Jesus' grandmother, Anne, removes the nail with a pair of pincers, his concerned mother, Mary, offers her cheek for a kiss. Joseph examines Jesus' wounded hand. A young boy, who would later be known as John the Baptist, brings in water to wash the wound, prefiguring his later baptism of Christ. An assistant of Joseph, who represents Jesus' future Apostles, observes these events.

In the background of the painting various objects are used to further symbolize the theological significance of the subject. A ladder, referring to Jacob's Ladder, leans against the back wall, and a dove which represents the Holy Spirit rests on it. Other carpentry implements refer to the Holy Trinity. Millais likely used Albrecht Dürer's print Melancholia I as a source for this imagery, along with quattrocento works. The sheep in the sheepfold seen through the door represent the future Christian flock.

It has been suggested that Millais was influenced by John Rogers Herbert's painting Our Saviour Subject to His Parents at Nazareth. He may also have drawn on a painting depicting Jesus helping Joseph in his workshop, which at the time was attributed to Annibale Carracci.

The painting was immensely controversial when first exhibited because of its realistic depiction of a carpentry workshop, especially the dirt and detritus on the floor. This was in dramatic contrast to the familiar portrayal of Jesus, his family, and his apostles in costumes reminiscent of Roman togas. Charles Dickens accused Millais of portraying Mary as an alcoholic who looks

Critics also objected to the portrayal of Jesus, one complaining that it was "painful" to see "the youthful Saviour" depicted as "a red-headed Jew boy". Dickens described him as a "wry-necked, blubbering red-headed boy in a bed-gown, who appears to have received a poke...playing in an adjacent gutter". Other critics suggested that the characters displayed signs of rickets and other disease associated with slum conditions. Because of the controversy, Queen Victoria asked for the painting to be taken to Buckingham Palace so that she could view it in private.

At the Royal Academy the painting was exhibited with a companion piece by Millais's colleague, William Holman Hunt, that also portrayed a scene from early Christian history in which a family help a wounded individual. This was entitled A Converted British Family Sheltering a Christian Missionary from the Persecution of the Druids.