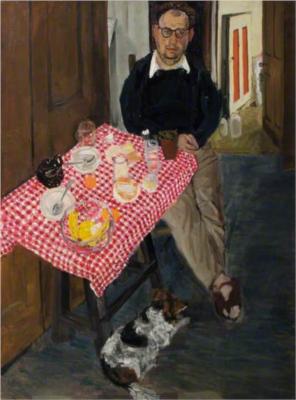 John Randall Bratby RA (19 July 1928 – 20 July 1992) was an English painter who founded the kitchen sink realism style of art that was influential in the late 1950s. He made portraits of his family and celebrities. His works were seen in television and film. Bratby was also a writer.

John Bratby was born on 19 July 1928 in Wimbledon. Between 1949 and 1950 he studied art at Kingston College of Art. He then began attending the Royal College of Art, completing his studies in 1954. He painted landscapes, still lifes, portraits and figure compositions and had his first solo exhibition that year at London's Beaux Arts Gallery.

He was given the opportunity to travel to Italy when he was awarded a bursary during his college years. The experience, though, left him uninterested in travelling and uninspired artistically.

Bratby is considered the founder of kitchen sink realism a movement in which artists use everyday objects, like trash cans and beer bottles as subjects of their works, which are often thickly-laden portraits or paintings. It began in the early 1950s and has been considered an aspect of John Osborne's "Angry Young Men Movement." Artists Derrick Greaves, Edward Middleditch and Jack Smith were also active in the development of the movement. Bratby often painted with bright colours, capturing his middle-class family's daily lives. The faces of his subjects often appeared desperate and unsightly. Bratby painted several kitchen subjects, often turning practical utensils such as sieves and spoons into semi-abstract shapes. He also painted bathrooms, and made three paintings of toilets. Initially there was some critical interest, but English critics later disregarded it as an important movement.

In 1958 Bratby created works for the fictional artist Gulley Jimson in the Alec Guinness film The Horse's Mouth. A portion of Bratby's painting Four Lambrettas and Three Portraits of Janet Churchman (1958) is featured on the cover of Mark Knopfler's 2007 album Kill to Get Crimson.

As he matured, Bratby's works became "lighter and more exuberant". He made the mural Golgotha for Lancaster's St Martin's Chapel in 1965. During his career, Bratby promoted himself on television and the radio and was one of his generation's best known artists. He mingled with celebrities to earn portrait commissions in the late 1960s. By the 1970s he had a series of portraits including Billie Whitelaw.

Bratby was elected to the Royal Academy of Arts in 1971.

In the 1980s he travelled and made paintings of the cities he visited. He made intimately-posed portraits of his wife and self-portraits. He continued to paint with bright colours, but had developed "an economy of line." His paintings are shown in the 1984 television mini-series adaptation of Judith Krantz's novel "Mistral's Daughter" about an artist.

Bratby's own work fell out of favour with the emergence of Pop art, but his paintings have increased in value and critical support over recent years. Paul McCartney has been a collector of his works. McCartney had given Bratby two hours in Bratby's studio in 1967. Three portraits resulted from the sitting.