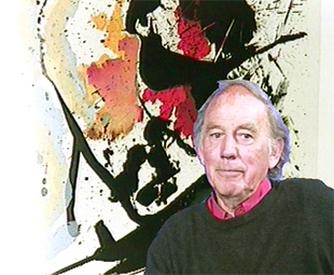 Jean Miotte (8 September 1926 – 1 March 2016) was a French abstract painter, in the style known as l'abstraction lyrique. He was born in Paris.

Miotte's work is preserved and studied at the Miotte Foundation, which occupied the third floor of the Chelsea Art Museum in Manhattan, New York.

Miotte came of artistic age in war-torn Europe in the decade after World War II, when non-figurative, gestural abstraction was emerging on both sides of the Atlantic as the dominant language in contemporary art. Seeking what has been termed art autre, artists such as Kazuo Shiraga, Jean-Paul Riopelle, Emil Schumacher, and Miotte championed the individual freedom of the artist as expressed through gestural brushstrokes and thick pools of color. As Miotte has commented, “My painting is a projection, a succession of acute moments where creation occurs in the midst of spiritual tension and as a result of inner conflicts.”

Miotte’s artistic influences include performance, choreography, jazz music, and particularly ballet. In London in 1948 he did set design and saw the work of Balanchine, the Diaghilev's Ballets Russes, and Margot Fonteyn. Being exposed to this variety of art was of profound inspiration to him; Miotte would experiment with gesture through painting and hone lyrical movement in his own art. Miotte’s lithe, inventive line echoes the living art of dance.

Miotte experiments in media ranging from oil to acrylic, gouache, ink, etching, lithography, and collage. His use of black paint on a white or raw surface frequently recalls calligraphy; when color appears, it ranges from primaries to earthy tones. Critics say he is unique among the Informels because he continues to grow, fighting repetition, questioning himself and his form of expression. In the 1990s he began producing the canvases currently on display, the largest of his career.