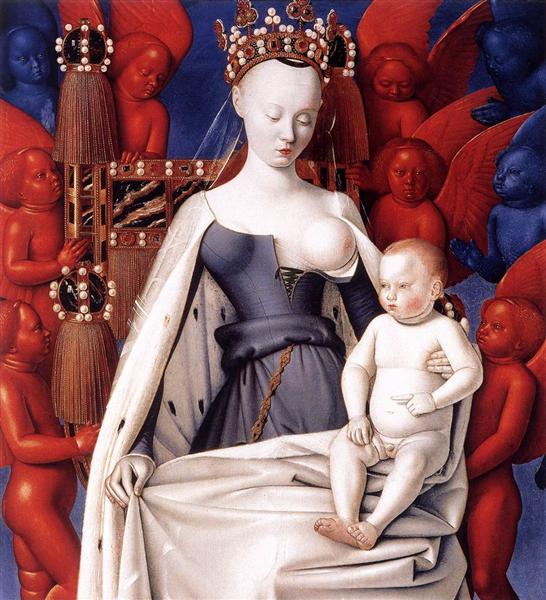 The Melun Diptych is a two-panel oil painting by the French court painter Jean Fouquet (1425–1480) created around 1452. The name of the diptych came from its original home in the Collegiate Church of Notre-Dame in Melun. The left panel depicts Etienne Chevalier with his patron saint St. Stephen and the right panel depicts the Virgin and Christ child surrounded by cherubim. Each wooden panel measures about 93 by 85 centimeters and the two would have been hinged together at the center. The two pieces, originally a diptych, are now separated. The left panel now resides in the Staatliche Museen in Berlin and the right panel is now located at the Royal Museum of Fine Arts, Antwerp, Belgium. A self-portrait medallion is also associated with the two panels. Measuring 6 centimeters in diameter, it would have adorned the frame, and consists of copper, enamel, and gold. The medallion is now located in the Louvre in Paris, France.

On the left Étienne Chevalier, the treasurer to King Charles VII of France, kneels in a red robe with in his hand in a position of prayer. The king liked to have non-aristocrats such as Chevalier about him because he thought them more reliable than nobles. On his right is Chevalier's patron saint, St. Stephen, in a dark deacon's robes with gold trim. His right arm is draped across Chevalier's shoulder while his left hand holds a book and a jagged rock, his representational attribute as he was stoned to death. Both men gaze off to the right as if they were looking at the Virgin and child on the other panel. The wall behind the treasurer and his patron saint is inlaid with marble panels and has elaborate white and gold moldings. The tiled floor's neutral colors create a stark contrast with the saturated colors of the men's robes. Identifying Chevalier is an engraving on the wall behind him that says "IER ESTIEN". This lettering has been used to link the painting to Fouquet since he never signed any of his work. It is very similar to lettering used in several miniatures which are attributed to him.

Seated on an elaborate gold throne, the Madonna and the Christ child are depicted in the right panel. The Madonna wears a blue dress, white mantle and a jewel-encrusted crown. On her lap sits the child, who makes a pointing gesture to the left with His left hand at the patron and the saint. The two are surrounded by blue and red cherubim, which greatly contrast with the pale skin of the Virgin and child. Although the figures are modeled realistically, the mood is otherworldly, described by historian Roger Fry as a dreamlike state of sentimentalism. The Madonna is depicted here as the Queen of Heaven and is meant to reveal her as between the veil of heaven and earth. She is both human and otherworldly. The unnatural colors have been attributed to represent the heraldic colors of the king, being red, white, and blue. The Virgin is believed to be an idealized portrait of Agnès Sorel, mistress of King Charles VII, who died two years earlier. Sorel was considered by many at the time to be "the most beautiful woman in the world" and therefore an obvious choice after which to model the Virgin. As minister of finance to the king, Etienne Chevalier was the executor of her will. Her costume and physical attributes have been compared to other representations of Sorel, such as another painting by Fouquet in which her dress is very similar to that in the diptych. It has also been suggested that the woman could be Chevalier's wife, Catherine Bude, over whose tomb the diptych was hung in Notre Dame, Melun.