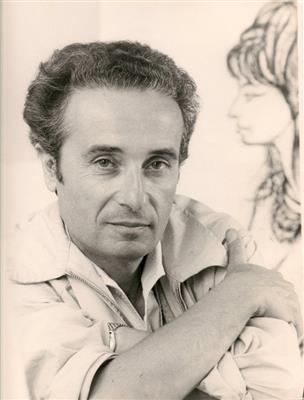 1907 On January 1st, Karnik Zouloumian was born in Aleppo in Syria, of Armenian parents.They had left Armenia because their families disapproved of their union. He was only ten when his father, a photographer, died. After that, he left Syria with his mother and sister, to settle in Egypt where his mother's family lived.He was a bright student at the Armenian Lycee in Cairo...
...At the age of 78, Carzou undertook a gigantic Apocalypse to decorate the chapel of the Congregation
des Dames de la Présentation at Manosque;a blue-green fresco,over six hundred and sixty-six square meters long,representing "the cycle of human adventure" such as he defined it. He shows his horror of war, genocides, holocaustes through the devastated landscapes, palaces in ruins, blockhaus and numerous intricated rails,
which can be found in this work. His fear of an over-undustrialised world is illustrated by four supersonic jets, messengers of future catastrophies. But an embracing couple gives us hope again; the Earth will be reborn
as symbolized by this woman-tree of the last painting, "l'accomplissement".


Carzou was born Karnik Zouloumian (Armenian: Գառնիկ Զուլումեան) in Aleppo, Syria to an Armenian family. Carzou later created his name from the first syllables of his name and surname, and added a Parisian nickname, "Jean". He was educated in Cairo, Egypt before moving to Paris in 1924 to study architecture.


He started working as a theater decorator but quickly realized he preferred drawing and painting. In 1938, more than a hundred exhibitions of his works were organized in Paris, in the French provinces and abroad. In 1949, he received the coveted Hallmark prize.


In 1952, he created costumes and sceneries for Les Indes Galantes of Rameau at the Opéra de Paris. He continued with Le Loup (1953) for "Les Ballets" of Roland Petit, Giselle (1954) and Athalie (1955) at the Opéra and "La Comédie française".


Carzou was elected a member of the Institut de France, Académie des beaux-arts, succeeding in the seat left vacant by the death of painter Jean Bouchaud in 1977. He was also awarded the National Order of Merit of France.


A Carzou museum exists in the town of Dinard (Brittany).


Carzou's work is held in the permanent collections of several institutions, including the Hermitage Museum, the University of Michigan Museum of Art, the Art Institute of Chicago, the Mount Holyoke College Art Museum, and the Fine Arts Museums of San Francisco.