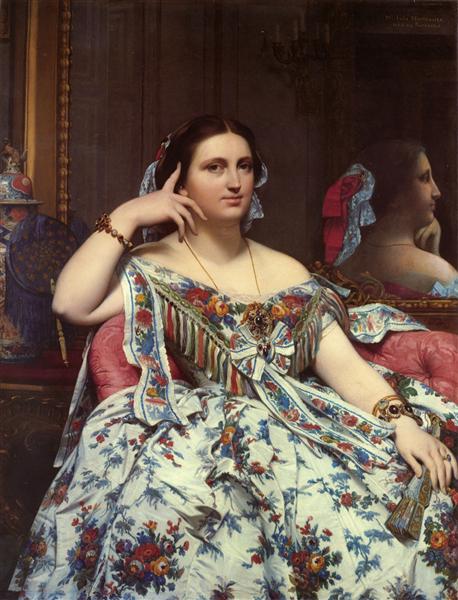 Marie-Clotilde-Inès de Foucauld (1821–1897) was the daughter of a civil servant in the department of forests and waterways. In 1842 she married a widower twice her age, the rich banker and lace merchant Sigisbert Moitessier, thus becoming Madame Moitessier. In 1844 Ingres was approached through an intermediary with the idea of painting her portrait.

Reluctant at this stage in his career to accept portrait commissions—he considered portraiture to be a lower form of art than history painting—he initially refused Sigisbert's request. However, when Ingres met Madame Moitessier, he was struck by her Junoesque beauty and agreed to produce a portrait.

He began work on the seated version, which was originally to include the Moitessiers' daughter, Catherine. Work on the commission proceeded slowly. Ingres, finding little Catherine "impossible", eliminated her from the composition sometime around 1847. Work on the painting was suspended in 1849, when the death in June of Ingres' wife left him unable to work for several months, and Madame Moitessier was distracted by her second pregnancy and the death of her father. In June, 1851, having been reminded by the woman he called "la belle et bonne" ("the beautiful and good") that her portrait had still not been completed, Ingres began afresh, painting the standing portrait of her, which he finished in December 1851. He then returned to the seated portrait, which he completed in 1856.

Characteristically, Ingres found inspiration in the art of the past when painting Madame Moitessier. The pose with a hand touching the cheek was taken from a fresco of Hercules and Telephus from Herculaneum that he may have seen in Naples in 1814, and which was familiar to him through engravings. A painting by Titian, Portrait of a Lady, may have inspired the profile in the mirror.

Numerous drawn studies for both portraits exist. A study on canvas for the seated portrait, in which the figure has been drawn by Ingres and the background painted by an assistant, is in the Musée Ingres in Montauban.