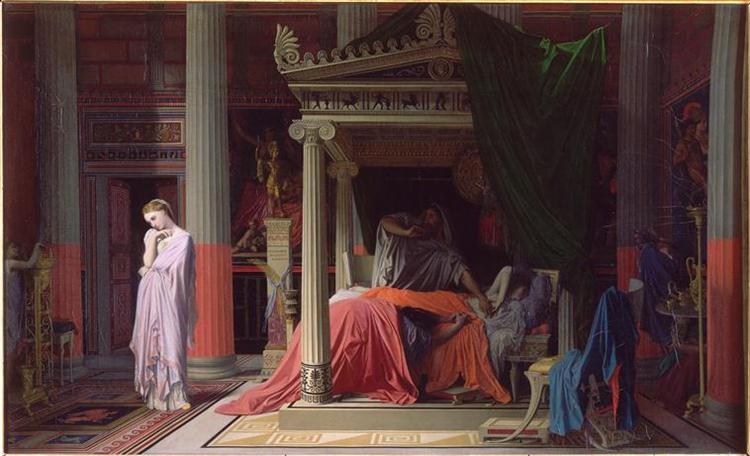 The Sickness of Antiochus or Stratonice and Antiochus is an 1840 painting by the French artist Jean Auguste Dominique Ingres. It is now in the Musée Condé in Chantilly.

In 1834 Prince Ferdinand Philippe, Duke of Orléans commissioned a painting from Ingres to act as a pendant to Paul Delaroche's 1834 The Assassination of the Duke of Guise (now also in the musée Condé). That same year Ingres left for Rome to take up his post as director of the French Academy. This delayed work on the commission, which began with a c.1838 sketch (now in the Cleveland Museum of Art). According to Lady Eglé Charlemont, she served as the model for Stratonice, Ingres' wife as the doctor, Hippolyte Flandrin for Antiochus' arms and Ingres himself for Seleucus.

The painting was completed in Rome in 1840, with help from assistants: Victor Baltard, then studying architecture at the Academy, provided drawings for two of Ingres' pupils, Paul and Raymond Balze, to use in painting part of the architectural setting. The Duke of Orléans was satisfied with the work and paid Ingres 6000 francs and commissioned a portrait from him. The painting was exhibited in the gallery at the Palais-Royal and was inherited by the Duke of Orléans' widow Hélène de Mecklembourg-Schwerin on his death in 1842.

After the 1848 Revolution, the painting was sold in Paris in 1852, when it was acquired by the Demidoff family for 63,000 francs. It was sold again in Paris in 1863, where it was bought for 93,000 francs by Édouard Bocher, acting as intermediary for the Duke of Orléans' brother the duke of Aumale, then in exile in London. Aumale exhibited it in the salle de Tribune of his château de Chantilly, where it still is.

The scene is one described in Plutarch's Life of Demetrius and also attested in the Bibliotheca historica of Diodorus Siculus, Lucian, Appian and Valerius Maximus. Antiochus was the son of Seleucus I Nicator. He fell in love with his father's new wife Stratonice of Syria, but kept this a secret despite falling mortally ill because of it. The doctor Erasistratus discovered the cause of Antiochus' sickness, since he became agitated and his heartbeat quickened when Stratonice entered the room. His father is thus shown collapsed at the foot of the bed.

Ingres' teacher Jacques-Louis David had also painted the subject, in Erasistratus Discovering the Cause of Antiochus' Disease, the painting which won him the prix de Rome in 1774. Ingres had made several drawings after David's painting, the earliest dating to 1807.

Another source may have been music and opera, since a lyre is shown in the foreground. The orchestre du Capitole de Toulouse produced Étienne-Nicolas Méhul's opera Stratonice several times whilst Ingres was a violinist with them. The painting shows the moment of the heroine's solo from Méhul's opera. The Assassination of the Duke of Guise was also based on an opera, Giacomo Meyerbeer's Les Huguenots.

The decor and dress are partly inspired by ancient models, with Stratonice in particular very closely influenced by Roman sculpture. The bed is inspired by a 4th-century BC naiskos or funerary monument shown on a vase discovered at Canosa and published in 1816.