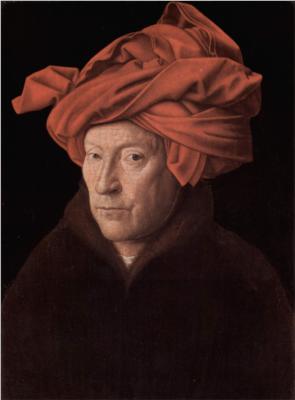 Jan van Eyck (Dutch: [ˈjɑn vɑn ˈɛik]) (before c. 1390 – 9 July 1441) was an Early Netherlandish painter active in Bruges. He is often considered one of the founders of Early Netherlandish painting, and, one of the most significant representatives of Northern Renaissance art. The few surviving records of his early life indicate that he was born c. 1380–1390, most likely in Maaseik. He took employment in the Hague as painter and Valet de chambre with John III the Pitiless, ruler of Holland and Hainaut in the Hague around 1422, when he was already a master painter with workshop assistants. After John's death in 1425 van Eyck was employed in Lille as court painter to Philip the Good, Duke of Burgundy, until 1429 before moving to Bruges, where he lived until his death. He was highly regarded by Philip, and undertook a number of diplomatic visits abroad, including to Lisbon in 1428 to explore the possibility of a marriage contract between the duke and Isabella of Portugal.

Apart from the Ghent Altarpiece and the illuminated miniatures of the Turin-Milan Hours, about 20 surviving paintings are confidently attributed to him, all dated between 1432 and 1439. Ten, including the Ghent altarpiece, are dated and signed with a variation of his motto, ALS IK KAN (As I (Eyck) can) always written in Greek characters, always a pun on his name.

Van Eyck painted both secular and religious subject matter, including altarpieces, single panel religious figures and commissioned portraits. His work includes single panels, diptychs, triptychs, and polyptych panels. He was well paid by Philip, who sought that the painter was secure financially and had artistic freedom and could paint "whenever he pleased". Van Eyck's work comes from the International Gothic style, but he soon eclipsed it, in part through a greater emphasis on naturalism and realism. Through his developments in the use of oil paint he achieved a new level of virtuosity. Van Eyck was highly influential and his techniques and style were adopted and refined by the Early Netherlandish painters.

Little is known of Jan van Eyck's early life and neither the date nor place of his birth is documented. The first extant record of his life comes from the court of John of Bavaria at The Hague where, between 1422 and 1424, payments were made to Meyster Jan den malre (Master Jan the painter) who was then a court painter with the rank of valet de chambre, with at first one and then two assistants. This suggests a date of birth of 1395 at the latest. However, his apparent age in the London probable self-portrait of 1433 suggests to most scholars a date closer to 1380. He was identified in the late 1500s as having been born in Maaseik, then a diocese of Liège. His last name however is related to the place Bergeijk, due to genealogical information related to the coat-of-arms with three millrinds; that information also implies that he stems from the Lords of Rode (Sint-Oedenrode). Elisabeth Dhanens rediscovered in the quarterly state "the fatherly blazon, in gold, three millrinds of lauric acid", similar to other families that descend from the Lords of Rode in the quarter of Peelland in the 'meierij van 's-Hertogenbosch'. His daughter Lievine was in a nunnery in Maaseik after her father's death.The notes on his preparatory drawing for Portrait of Cardinal Niccolò Albergati are written in the Maasland dialect.