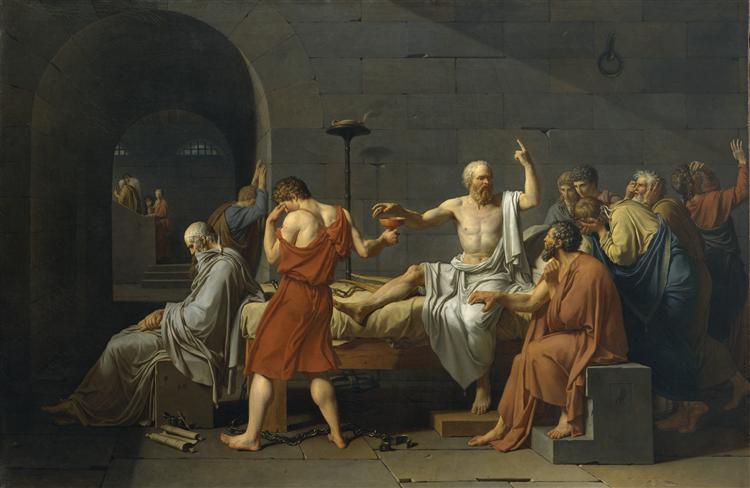 The Death of Socrates

The Death of Socrates (French: La Mort de Socrate) is an oil on canvas painted by French painter Jacques-Louis David in 1787. The painting focuses on a classical subject like many of his works from that decade, in this case the story of the execution of Socrates as told by Plato in his Phaedo. In this story, Socrates has been convicted of corrupting the youth of Athens and introducing strange gods, and has been sentenced to die by drinking poison hemlock. Socrates uses his death as a final lesson for his pupils rather than fleeing when the opportunity arises, and faces it calmly. The Phaedo depicts the death of Socrates and is also Plato's fourth and last dialogue to detail the philosopher's final days, which is also detailed in Euthyphro, Apology, and Crito.

In the painting, an old man in a white robe sits upright on a bed, one hand extended over a cup, the other gesturing in the air. He is surrounded by other men of varying ages, most showing emotional distress, unlike the stoic old man. The young man handing him the cup looks the other way, with his face in his free hand. Another young man clutches the thigh of the old man. An elderly man sits at the end of the bed, slumped over and looking in his lap. To the left, other men are seen through an arch set in the background wall.

Although he consulted Father Adry, a scholar on the subject, David's depiction of Socrates death contains many historical inaccuracies. For simplicity, he removed many characters originally described in the dialogues of Plato. However, he included Apollodorus, the man leaning against the wall just within the arch, even though he is said to have been sent away by Socrates for displaying too much grief. David also misrepresented the ages of many of the pupils of Socrates, including Plato. Plato would have been a young man at the time of Socrates's death, but in this painting he is the old man sitting at the foot of the bed. Even the face of Socrates is much more idealized than the classical bust that is typically used as a reference portrait of Socrates.

David uses color to highlight the emotion in this painting. The shades of red are more muted on the edges of the painting and become more vibrant in the center, culminating in the dark red robe of the man holding the cup of poison, generally taken as offering the cup to Socrates rather than receiving it after Socrates had consumed its contents. The only two serene men, Socrates and Plato, are garbed in a contrasting bluish-white. The more muted color scheme of this painting may be a response to critics of David's Oath of the Horatii, who called his colors "garish".

David signed this painting in two places; he put his full signature under Crito, the young man clutching Socrates's thigh, and his initials under Plato. David's signature placement often had symbolic meaning – for example, in his painting of Stanisław Kostka Potocki, David signed in the collar of the dog that is barking at the sitter. In Death of Socrates, his signatures also have meaning. His initials under Plato are a reference to the fact that the story comes from Plato, a thanks for the inspiration. His fuller signature under Crito means that this is the character whom the artist identifies most with. This may be a reference for Crito’s position in the composition – clutching Socrates's thigh. In this way, David would be seen as a man who likewise clutches at the morals and values that Socrates represents.