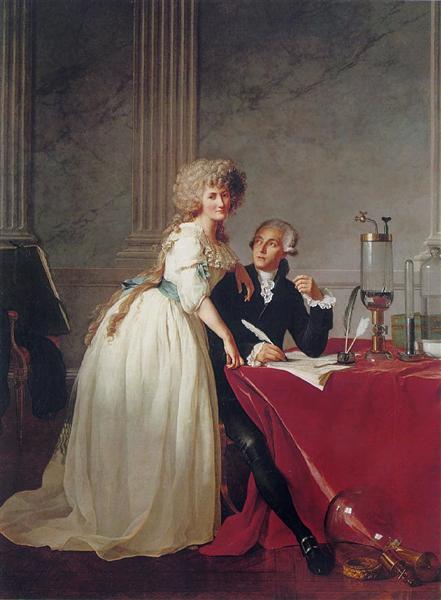 Portrait of Antoine-Laurent and Marie-Anne Lavoisier

The Portrait of Antoine-Laurent Lavoisier and his wife is a double portrait of the French chemist Antoine Lavoisier and his wife and collaborator Marie-Anne Pierrette Paulze, commissioned from the French painter Jacques-Louis David in 1788 by Marie-Anne (who had been taught drawing by David). It is now in the Metropolitan Museum of Art in New York.

David was paid 7,000 livres for it on 16 December 1788. The portrait was not permitted a public display at the Paris Salon for fear that an image of Lavoisier – a figure connected to the royal court and the Ancien Régime – might provoke anti-aristocratic aggression from viewers.

In 1836, the painting was left by Marie-Anne to her great-niece, and it remained in the collection of the comtesse de Chazelles and her descendents until 1924, when it was bought by John Davison Rockefeller. Rockefeller gave it to the Rockefeller Institute for Medical Research in 1927, and it was acquired from this institution by the Metropolitan Museum in 1977.

It shows the couple in his office, with a wood-panelled floor and walls of false marble with three classical pilasters. In the centre the couple face the viewer, with both their heads in three-quarters profile. Marie-Anne is shown standing in profile looking at the viewer. Her costume is that in fashion at the end of the 18th century – a white wig, a white dress with a lace collar, and a blue fabric belt. She rests on her husband's shoulder, with her right hand leaning on the table.

Antoine Lavoisier is seated, wearing a black vest, culottes, stockings and buckled shoes, a white shirt with a lace jabot and a powdered wig. His face turns towards his wife and he rests his left arm on the table, whilst writing with his right hand using a feather pen. The table is covered with scarlet velvet, many papers, a casket, an inkwell with two more feather pens, a barometer, a gasometer, a water still and a glass bell jar. A large round-bottom flask and a tap are on the floor to the right, by the table. To the table's extreme left is a chair with a large document-case and black cloth on it. The document-case, presumed to correspond to Madame's interest in the art of drawing, is an emphasis of the depiction of a left to right symmetry in the portrait of M. Lavoisier and objects of science visibly displayed on the right, while Madame with her document case of artistic drawings prominently displayed on the left side of the portrait. Significant also is the depiction by David of the wife being portrayed in a posture physically above the husband, somewhat atypically by late 18th century conventional standards of depicting a married couple in portraiture.

The painting is signed at the lower left: L DAVID, PARISIIS ANNO, 1788.

The painting is on permanent display at the Metropolitan Museum of Art in New York City.