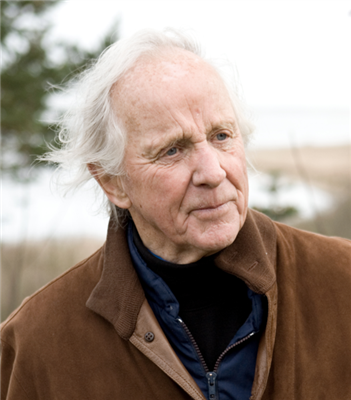 
Jacob Jensen was born in 1926 in Copenhagen. Son of Todd and Raquel Jensen, he left school after the seventh grade and completed training as an upholsterer. In 1947 he began working in his father's shop where he designed chairs. In 1948 he attended the School of Arts and Crafts (Danmarks Designskole) where he enrolled in the furniture design department. In 1952 he became the first student to graduate from the institution's Industrial Design program (founded by Jørn Utzon), which focused on mass-produced objects for everyday use.


From 1952 to 1958, Jensen worked at Copenhagen studio Bernadotte & Bjørn (the first industrial design drawing office in Denmark) as an industrial designer. During his time there he designed various works including the Margrethe Bowl for company Rosti (Rosti Mepal), which became Jensen's first financial success. This was followed by a period in New York City working with Raymond Loewy. He also spent some time in Chicago with industrial design firm Latham, Tyler & Jensen.


In 1964 he started working as a designer for Bang & Olufsen. During this time Jensen became known for designing audio components of characteristic styles that involved 2-dimensional flattened surfaces with streamlined silver and black designs. He also worked in collaboration with various other companies where he designed wristwatches, kitchen appliances, telephones, chairs, and other products. Jensen is credited with developing the B&O design style, which is still used today. Many of Jensen's designs have been included in permanent design collections at museums around the world. Jacob Jensen died on May 15, 2015 in Virksund, Denmark.


In 1964 Jensen started working as chief product designer for Bang & Olufsen, an established Danish manufacturer of high-end home electronic products. By 1970s, Bang & Olufsen had received numerous awards for its product designs. The company devised a new slogan, “We think differently,” which was meant to embody the characteristics that made Bang & Olufsen different from other companies at the time. The company's new products and slogan led to an identification of what Bang & Olufsen referred to as the Seven Corporate Identity Components. These principles, which underpinned an approach to the company's product design, included Authenticity, Autovisuality, Credibility, Domesticity, Essentiality, Individuality, and Inventiveness.


Through his time at Bang & Olufsen, Jensen developed over 200 products for the company. During this time he established a minimalistic, horizontal, and severe design style that became characteristic of his product designs. His style involved using brushed aluminium, white and black plastic, smooth surfaces, futuristic controls, and simple shapes for products including amplifiers, speakers, tuners, turntables and other products. He redesigned standard knobs and dials, replacing them with clear-plastic panels, wafer-thin push buttons, and other innovative elements. Jensen is recognized as Bang & Olufsen’s minimal design idiom, and worked with the company until 1991.