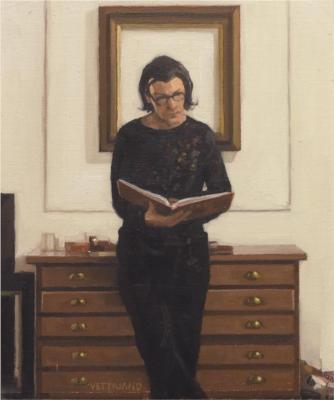 Jack Vettriano was born in St. Andrews in Fife and grew up in the industrial seaside town of Methil, about 30 minutes south of his birthplace. He was raised in poverty; he lived with his mother, father and older brother in a spartan miner’s cottage, sharing a bed with his brother and wearing hand-me-down clothes. From the age of 10, his father sent him out delivering papers and milk, cleaning windows and picking potatoes — any job that would earn money. His father took half his earnings.

Vettriano left school at 16 and later became an apprentice mining engineer. For a short time in the late 1960s, he had a summer job as a bingo caller at the Beachcomber Amusements on Leven Promenade. Vettriano took up painting as a hobby in the 1970s, when a girlfriend bought him a set of watercolours for his 21st birthday. His earliest paintings, under his birth name "Jack Hoggan", were copies or pastiches of impressionist paintings; his first painting was a copy of Monet's Poppy Fields. Much of his influence came from studying paintings at the Kirkcaldy Museum and Art Gallery. In 1984, Vettriano first submitted his work to the Shell-sponsored art exhibition in the museum.

In 1987, when he was 36, Vettriano dumped his wife Gail, seeking to emulate Gauguin. He quit his job in educational research, and moved to Edinburgh, where he adopted his mother's maiden name. He applied to study Fine Art at the University of Edinburgh, but his portfolio was rejected.

In 1989 Vettriano submitted two canvases for the Royal Scottish Academy annual show. Both paintings sold on the first day and Vettriano was approached by several galleries. Further exhibitions followed in Edinburgh, London, Hong Kong and Johannesburg. In November 1999, Vettriano’s work was shown for the first time in New York City, when 21 paintings were displayed at The International 20th Century Arts Fair at The Armory. More than 40 collectors from the UK flew out for the event and 20 paintings were sold on the opening night.

In 1996 Sir Terence Conran commissioned Vettriano to create a series of paintings for his new Bluebird Gastrodome in London. The seven paintings, inspired by the life of Sir Malcolm Campbell, hung there for ten years. Heartbreak Publishing, Vettriano's own publishing company, produced a boxed set featuring signed, limited-edition prints of all seven paintings to mark the 75th anniversary of Sir Malcolm Campbell's final World Land Speed Record. The Bluebird paintings were auctioned by Sotheby's at the Gleneagles Hotel in Perthshire on 30 August 2007, and made more than £1m in all: the most expensive was Bluebird at Bonneville, bought for £468,000.