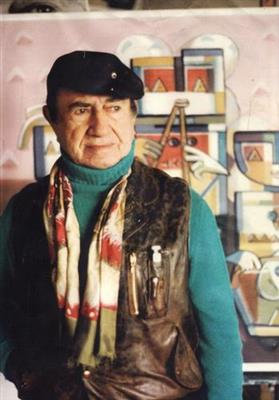 Ibrahim Kodra in his studio

Kodra was born in Ishëm in Albania. His life in Tirana in the dormitory of the school "Naim Frashëri", is interrupted when 20 years old (1938) leaves Albania forever with a scholarship from the royal court to the Academy of Fine Arts in Rome. He leaves Rome and ends up in Milan, at the Brera Academy of Fine Arts. He exhibits in Rome, Milan, Venice, Paris, Belgrade, New York, creates comparisons and reports with great painters such as Picasso, Marc Chagall, Henry Matisse, Lucio Fontana, Renato Guttuso, with poets, writers, critics and directors by Eugenio Montale and Vittorio Sereni, from Berton to Bruno Munari, and Giuseppe Marotta.
He became involved in post-war artistic movements, a period corresponding to the era of surrealism, expressionism, cubism and futurism. Ibrahim Kodra, within these art forms, realized his special path which was called "the primitive of a new civilization". Undoubtedly, Kodra was one of the most distinguished by a generation of painters of the 1960s-1970s. In 1947, he met Paul Eluard and in 1948 with the famous Pablo Picasso.
In 1953, he participated in the International Exhibition of the University of Paris and continued to exhibit his works all over the world. Kodra has exhibited with Picasso, Chagal, Roualt, Dufy, Matisse and Modigliani at the Venice International Exhibition. His works can be found in many anthologies of the artist in various museums in Europe, America and at international art fairs.
For more than 30 years, he lived in Milan, where he died on February 7, 2006. The painter who had friendships with the greatest artists of the era, never forgot his Albanian origin. His mother and Albania were the most expensive things for him. He kept the first drawings for his mother throughout his life. While he carried the Albanian flag with him in the hospital bed where he closed his eyes. On February 10, 2006, homage was paid to the Tirana Opera and Ballet Theater, before heading to his hometown, where he was buried.
The body of the painter rests peacefully in front of the door of the ancient castle in Ishëm. His home in Milan became the "Ibrahim Kodra Museum", where artists, young talents and art lovers go to admire his works. Kodra is considered the most important Albanian painter known internationally. The book "Memories", written by Ibrahim Kodra, states: "It was March 1984 and my exhibition 'Fantastic in Art' made a lot of noise, because journalists wrote that Kodra stands between Da Vinci and Michelangelo." That's enough to discover the similarities. The "V" effect, formed in Da Vinci's "Last Supper" painting, is a message between Christ and Mary Madalena. If Dan Brown, the American author of The Da Vinci Code, knew Ibrahim Kodra, he would probably find more room to expand his ideas. We made this digression to show that if in the past, the figure of the great artist has been overlooked in us, today he is remembered with respect. In 1996, he was honored with the title "Honor of the Nation". He has a rich collection of awards, where we can highlight: Gold Medal of the French Academy, Honorary Citizen in many cities of Italy, the award "Golden Ambrogini" from the Municipality of Milan. The Swiss foundation "Ibrahim Kodra" does a good job in this direction for the recognition of his work. This foundation was founded in Lugano to convey the art message of European artist Ibrahim Kodra, as an instrument for peace and culture, as a common thread that connects different peoples. Mrs. Maria Pacolli, president of this prestigious foundation, very communicative, noble, modest, but best engaged with this project, emphasizes that in cooperation with institutions in Albania, Kosovo, Italy and others, “The foundation supports and develops projects cultural, social and educational, promoting cultural exchange between Switzerland and different countries of the world ”. Thanks to the generosity of its donors, the foundation supports new cultural and educational projects.


Kodra was born in Ishëm (Ishmi), Albania, son of Murat and Xhixhe. His mother died when he was young, and he did not receive adequate treatment from his stepmother. His father was working in the Commercial Marine. Ibrahim took art classes from Odhise Paskali during 1929, focusing on sport as well. Kodra practiced discus and hammer throw, without pretending any professional career in sport, since those disciplines were not even present in Albania at that time. While taking drawing classes, one of his drawings would come into the focus of Queen Geraldine. This would change his course of life, and later it would be speculated that he was friend of Prince Tati and part of the royal circle, which was not true, though it never seriously bothered the artist. In 1938, he went to Italy to study fine arts supported by a scholarship from the Albanian Kingdom, and there he won a second scholarship from the Italian government as an emerging talent with the intervention of Jacomoni, and went to study in Milano in the Academy of Fine Arts of Brera.


In 1944 he opened his first workshop in Milan; in 1948 he opened a personal and group exposition in the "Art Club" in Rome, where he met and become friend of Pablo Picasso, which often will be contested on artistic reflections. In 1950 he painted frescos in the most important museums and buildings of Milan. Kodra then opened an exposition with Picasso, Henri Matisse, Amedeo Modigliani, Georges Rouault, Dufy and others in the Mostra del Disegno in Chiavari (Italy).


He had many other personal expos all around the world, including:


His works are in the Museum of Vatican, in the Chamber of Deputies (House of Representatives) of the Italian Parliament in Rome, in exclusive private collections all around the world. In 1996 he won the "Honor of the Nation" award from Albania (Albanian: Nderi i Kombit), and in 1997, shortly after painting Albania Fantastica he was appointed honorary consul and he was given a diplomatic passport to the Republic of Albania.


He died in Milan in 2006. Kodra was buried in front of Ishëm Castle despite his will not to be buried there. His house in Milan is converted in a museum, with the initiative of Fatos Fasliu, president of "Ibrahim Kodra Foundation" in Milan. In February 2010, a museum dedicated to his work was opened in Melide, Lugano, with the support of Albanian entrepreneur Behgjet Pacolli and the "Ibrahim Kodra" Foundation (Fondazione per i Ragazzi del mondo di Ibrahim Kodra), a Swiss cultural organization supporting emerging art talents and promoting Kodra's work.


Kodra works are kept in the Museum of the Vatican, in the Chamber of Deputies of the Italian Parliament, in the Kosova National Art Gallery of Pristina, in the collection of art of the City of Milan, in the art gallery of the basilica santuario di Santa Maria de Finibus Terrae and of Santa Maria di Leuca.