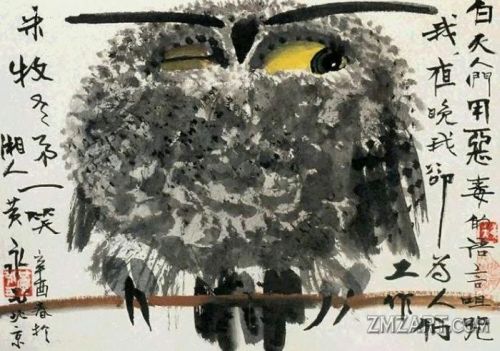 Huang Yongyu was harshly criticized in 1974 and reprimanded for his winking “Owl” painting for its purportedly blasphemous animosity towards the Proletarian Cultural Revolution and the Socialist system. The artist’s “Owl” was flagged as part of the “Black Painting Exhibition” held at China’s National Art Gallery in Beijing, as an example of being counterrevolutionary. The Gang of Four interpreted the winking owl as the artist’s portrayal of public officials turning a blind eye to wrong doings. For this, Huang Yongyu was harshly reprimanded for three and a half years laboring at a reform camp.

Joan Lebold Cohen, art historian, photographer and curator, and associate of the Fairbank Center for Chinese Studies at Harvard, comments in her book, The New Chinese Painting 1949-1986 (1987), that: “[o]bviously, the verisimilitude to nature was ignored – owls often close one eye – but the entire Black Paintings concept was like Alice in Wonderland nonsense.” Pg. 125

Similarly, Eugene Wang, assistant art professor at Harvard University, wrote in his publication, The Winking Owl: Visual Effect and Its Art Historical Thick Description” Critical Inquiry 26 (Spring 2000), “There is a consensus now that the painter was a victim more sinned against than sinning, that he became an innocent pawn in a game of high-level power politics, and that the inquisition to which the painter and his painting were subjected made a travesty of art criticism. It is not clear, however, how innocent the painting was. Does the painting contain the message it was charged with?” Pg. 438

Mr. Wang does ask an interesting question though. While clearly overblown, was the artist in fact, entirely innocent of the charges? According to Laing’s publication, The Winking Owl: Art in the People’s Republic of China (1988), the author wrote: “Huang Yongyu had earlier (1962) gotten into trouble for his “counterrevolutionary” Animal Crackers poems in which he used animals to lampoon political figures.” Pg. 86