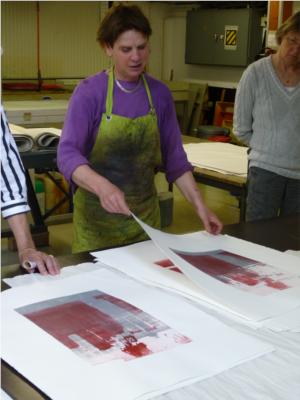 Hilly van Eerten is a Dutch woman-artist, making her digital art prints since 2016. Previously she made mono-prints till c. 2015.

In 1986 she started her art education in Utrecht at the School of Fine Arts. She followed lessons in painting and drawing, later in graphic print art. Fine print art became her specialization during her last years 1990-1992.

Hilly van Eerten moved to Amsterdam in 1993 where she lives and works till now. Without any delay she started here to print on the Amsterdams Grafisch Atelier (AGA).

As starting independent graphic artist Van Eerten made first series of lithography prints on paper till circa 2000. She preferred this print-technique because printing lithography gave her so many possibilities to put her colors painterly on the stone.
It was at just at the Amsterdam Print Studio where she discovered for herself the possibilities of mono-type / mono-print. One of her colleagues there practiced these technique. For Hilly van Eerten this print technique toffered her the possibility to start with her own photos as visual basic material and to print them in a mixed way of several layers, one over the other.

Her style of mono-print was rather unusual because the final result gives only one unique art-print: a mono-print. This is the consequence of starting the creative process with a pile of black-white copies of selected images from photos she made earlier. After selecting these visual elements in copy she arranges and combines them in the print process itself. It is really ‘collaging’ how she combines these visual elements by printing them in successive print runs, next to & over each other. By this way of creating each used copy got destroyed after one print-run - unique, unrepeatable art-prints.

This way of printing Hilly van Eerten started circa 2000.
By copying her own photos in black-white images and cutting and pasting them, some photo-collages emerged gradually.
To creatre these mixed images the monotype technique suited her the best. Her photos of New York City Manhattan got transformed in prints in this way. These unique prints of New York Gates became circa 2001 here first series of mono-types which pleased her.

Between 2001 and 2006 other subjects appeared in her mono-types like paving stones, roof tiles and fishing nets – all with its characteristic structures.

In 2006 The Urban Dutch City got a leading role in the mono-type art of Hilly van Eerten. Especially the construction sites and building pits in Amsterdam, Rotterdam and The Hague she found very attractive subjects for her mixed print art, because of its dynamic transformation and the important role of the material aspect of buildings, streets and constructions.

After a period of making many photos of construction works and building sites in the big cities of The Netherlands and exhibiting them in 2014 in Amsterdam, she made a huge swift in her graphic art.
She then learned how to edit digitally her own photos. This created for her the possibility to use her edited photos as several layers - one over another - in a digital art print. Since 2015 she exclusively made her art prints in this digital technique.