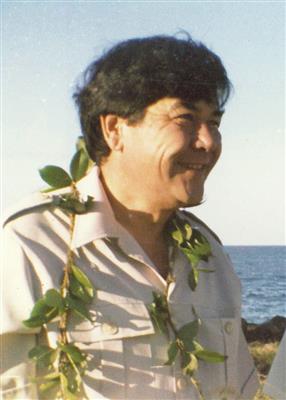 Herbert Kawainui Kāne (June 21, 1928 – March 8, 2011), considered one of the principal figures in the renaissance of Hawaiian culture in the 1970s, was a celebrated artist-historian and author with a special interest in the seafaring traditions of the ancestral peoples of Hawaiʻi. Kāne played a key role in demonstrating that Hawaiian culture arose not from some accidental seeding of Polynesia, but that Hawaiʻi was reachable by voyaging canoes from Tahiti able to make the journey and return. This offered a far more complex notion of the cultures of the Pacific Islands than had previously been accepted. Furthermore, he created vivid imagery of Hawaiian culture prior to contact with Europeans, and especially the period of early European influence, that sparked appreciation of a nearly forgotten traditional life. He painted dramatic views of war, exemplified by The Battle at Nuʻuanu Pali, the potential of conflicts between cultures such as in Cook Entering Kealakekua Bay, where British ships are dwarfed and surrounded by Hawaiian canoes, as well as bucolic quotidian scenes and lush images of a robust ceremonial and spiritual life, that helped arouse a latent pride among Hawaiians during a time of general cultural awakening.


Kāne (kɑh-nay) was born in the community of Marshfield, Minnesota in the United States. His father, who was also named, Herbert, worked in family poi business, and became a paniolo (Hawaiian cowboy), then traveled the US in a Hawaiian Band. He later served in the Army and Navy, and had his own practice as a doctor of Optometry. Herbert Jr.'s grandfather immigrated to Waipio Valley from China and being very industrious he built the first poi factory in the islands, growing taro and producing poi for market. His mother’s family were farmers of Danish ancestry in Wisconsin. Kāne’s childhood was divided between Wisconsin and Hawaiʻi. He describes in his book, Voyagers, an early awakening to art. In 1935 he was a barefoot child in Hilo, Hawaii, brought by his mother to the opening of a gallery exhibition of the work of D. Howard Hitchcock. He writes that he was “stunned, confronted with miracles” seeing Hitchcock’s work and speaking with him briefly. Hitchcock was the first Hawaiian-born artist to achieve international recognition, and his work focused on unique Hawaiian subject matter, particularly the volcanic eruptions near Hilo. According to his own account, besides this exposure to art and the ongoing encouragement of his parents to pursue his interest in drawing, Kāne’s most formative experiences in childhood were in Hawaiʻi, where his father and his family passed along the traditional folk tales of the islands.


Kāne served in the United States Navy, qualifying for veteran’s educational benefits under the G.I. Bill. After he was discharged, he used those benefits to attend the School of the Art Institute of Chicago, in Chicago, Illinois, earning a bachelor's degree and, in 1953, a master's degree. Under an arrangement between the two schools at the time, his master's degree was awarded by the University of Chicago.


Herb had his own Advertising studio on Chicago's Michigan Avenue, which is known as "The Magnificent Mile." He was a very successful Designer/Illustrator/Author. His talents were expansive working with everything from books and magazines, architectural designs, commercial television work for Kelloggs and various companies, and more. Kāne said he found advertising work unsatisfying. “The end came when I won a Jolly Green Giant campaign, and for a year, did drawings and paintings of that big green fairy until I could no longer suffer it.”