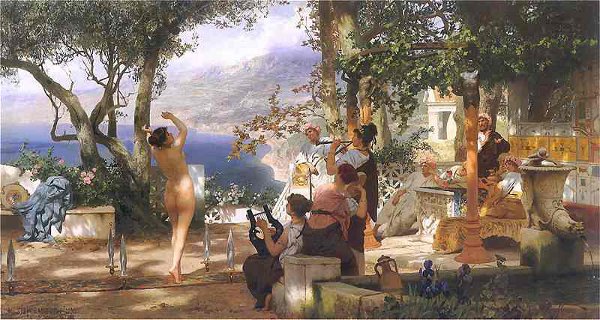 The Sword Dance (Polish: Taniec wśród mieczów) is an 1881 painting by the Polish painter Henryk Siemiradzki. It is also known as Dance Amongst Daggers, Dance Amongst Swords and similar variations. It depicts a nude woman who dances between swords while a group of women play music and a few men watch. The setting is Italian and there have been several interpretations of what exactly the painting depicts.

Siemiradzki made four versions of the painting, each with a slightly different composition and colour scheme. One of the versions, originally commissioned by K. T. Soldatenkov, is located at the Tretyakov Gallery in Moscow. Another version was sold at auction in 2011 for 2,098,500 dollars, which was the new record for a Siemiradzki painting. The record was held until 2013, when Un naufragé mendiant was sold for 1,082,500 pounds.