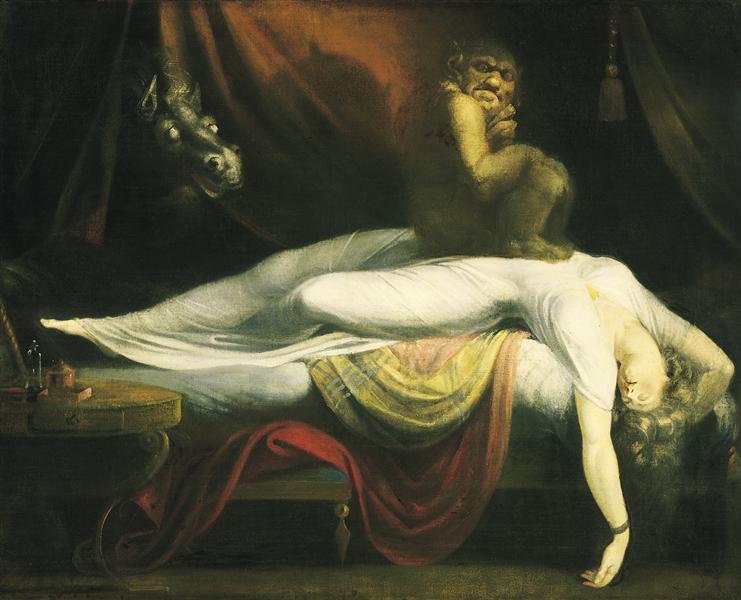 The Nightmare is a 1781 oil painting by Anglo-Swiss artist Henry Fuseli. It shows a woman in deep sleep with her arms thrown below her, and with a demonic and apelike incubus crouched on her chest.

Interpretations vary. The canvas seems to portray simultaneously a dreaming woman and the content of her nightmare. The incubus and horse's head refer to contemporary belief and folklore about nightmares, but have been ascribed more specific meanings by some theorists. Contemporary critics were taken aback by the overt sexuality of the painting, since interpreted by some scholars as anticipating Jungian ideas about the unconscious.

The Nightmare simultaneously offers both the image of a dream—by indicating the effect of the nightmare on the woman—and a dream image—in symbolically portraying the sleeping vision. It depicts a sleeping woman draped over the end of a bed with her head hanging down, exposing her long neck. She is surmounted by an incubus that peers out at the viewer. The sleeper seems lifeless and, lying on her back, takes a position then believed to encourage nightmares. Her brilliant coloration is set against the darker reds, yellows, and ochres of the background; Fuseli used a chiaroscuro effect to create strong contrasts between light and shade. The interior is contemporary and fashionable and contains a small table on which rests a mirror, phial, and book. The room is hung with red velvet curtains which drape behind the bed. Emerging from a parting in the curtain is the head of a horse with bold, featureless eyes.

For contemporary viewers, The Nightmare invoked the relationship of the incubus and the horse (mare) to nightmares. The work was likely inspired by the waking dreams experienced by Fuseli and his contemporaries, who found that these experiences related to folkloric beliefs like the Germanic tales about demons and witches that possessed people who slept alone. In these stories, men were visited by horses or hags, giving rise to the terms "hag-riding" and "mare-riding", and women were believed to engage in sex with the devil. The etymology of the word "nightmare", however, does not relate to horses. Rather, the word is derived from mara, a Scandinavian mythological term referring to a spirit sent to torment or suffocate sleepers. The early meaning of "nightmare" included the sleeper's experience of weight on the chest combined with sleep paralysis, dyspnea, or a feeling of dread. The painting incorporates a variety of imagery associated with these ideas, depicting a mare's head and a demon crouched atop the woman.

Sleep and dreams were common subjects for the Zürich-born Henry Fuseli, though The Nightmare is unique among his paintings for its lack of reference to literary or religious themes (Fuseli was an ordained minister). His first known painting is Joseph Interpreting the Dreams of the Butler and Baker of Pharaoh (1768), and later he produced The Shepherd's Dream (1798) inspired by John Milton's Paradise Lost, and Richard III Visited by Ghosts (1798) based on Shakespeare's play.