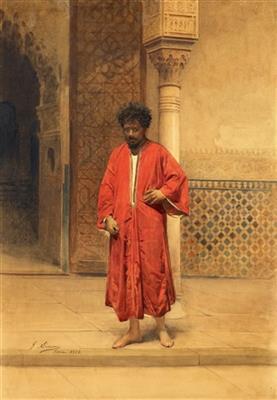 Gustavo Simoni (5 November 1845, Rome - 10 May 1926, Palestrina) was an Italian painter, watercolorist and art teacher. He is best known his Orientalist scenes.


His father, Antonio, was a barber who originally came from Pratica di mare [it]. He had a younger brother, Scipione [it] who, with his encouragement, also became a painter.


beginning in 1877, he travelled extensively, visiting France, Spain and, especially, North Africa, where he made several lengthy stays in Algeria, Tunisia and Morocco. For many years, he lived in an isolated house near Tlemcen, where he was visited by his friends and associates from Rome and developed a relationship with the local authorities. In 1889, he won a gold medal at the Salon for his monumental depiction of the burning of Persepolis. King Umberto I was among his regular clients. He was also a member of the Accademia di San Luca.


In the 1890s, he opened a studio in Paris and started a school for Orientalist painting in Rome. When he returned there, he lived in farmhouse that had been renovated by his son-in-law, the architect Francesco La Grassa [it]. He had five children altogether, three of whom became painters: Paolo (1882-1960), also an Orientalist, who died during the Algerian War, Mario (1885-1953), who specialized in still-lifes, and Ettore (1895-?), who emigrated to Arizona and painted desert landscapes.


In addition to his Orientalist scenes, he created genre scenes, plus highly imaginative historical scenes from ancient Rome and the 17th century. the 18th century. He was one of the original members of the Associazione degli Acquarellisti romani [it]. His works, however, are generally more familiar among watercolorists in England than in Italy.


Outside of Italy, his works may be seen in Glasgow, Leipzig, Melbourne and New York. Maria Martinetti and Filiberto Sbardella [it] were, perhaps, his best known students.