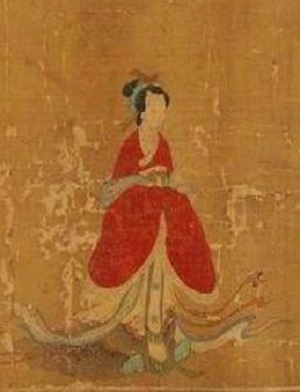 Guan Daosheng (Chinese: 管道昇; Wade–Giles: Kuan Tao-sheng; 1262–1319) was a Chinese poet and painter who was active during the early Yuan Dynasty. She is credited with being "the most famous female painter in Chinese history...remembered not only as a talented woman, but also as a prominent figure in the history of bamboo painting."

She was born in Huzhou and was the wife of Zhao Mengfu, a renowned scholar-official and artist often considered the greatest artist of the earlier Yuan period. Likely a descendant of the high-ranking Wu Xing official Guan Zhong, she was well-educated in her youth, where she grew up on her family's ancestral lands, nicknamed "The Roost of the Esteemed."

Guan and Zhao were married in 1286 and established a home in Wuxing "with the purchase of a town house with gardens in Huzhou, and a country retreat at Dongheng village near Deqing," where they were later buried. While married to Zhao, Guan gave birth to two sons and two daughters, who she raised alongside the one son and four daughters Zhao had with his previous wife, who died prior to his marriage to Guan. Because of Zhao's important position within the Yuan bureaucratic hierarchy, Guan was able to accompany him on long trips around the nation, a luxury most citizens, especially women, would not have enjoyed. She especially often joined him on trips between the northern capital at Dadu and the southern cultural center of Huangzhou. In the year of their marriage, they embarked on a three-year trip from their home in Wuxing to Dadu.

Both Guan Daosheng and her prominent husband Zhao Mengfu "harboured deep Chan Buddhist faith and enjoyed friendship with monks, such as their teacher Zhongfeng Mingben and others residing in the monasteries on the Tianmu Mountains, close to their homes in Wuxing and Deqing in northern Zhejiang...." All in all, she and her husband had six daughters and three sons.

Guan Daosheng died in 1319 at the age of 58 after a long illness. She died "on board the official boat in Shandong on the way home"; her husband had sought permission to return due to his wife's illness. "The text of his letter informing [a relative] of her death and his painful journey home with her coffin, known as 'Zuimeng tie' ('Alcoholic delirium'), portrays a man devastated by the loss." Because some of her husband's writings focused on his dislike of northern China's climate where they lived, "it may even [have] been that a meagre northern diet contributed to [her] death...possibly of beriberi brought on by malnutrition." In the three years he lived after her death, it is said that he painted mainly bamboo, one of her favourite subjects, in her memory. Today, their "town house and garden in Huzhou, Lianhuazhuang, and their tomb in the country at Dongheng have been restored" and a small museum has been built in her husband's honour.

Guan appears to have become active as a painter around 1296 and as a calligrapher in 1299. She was talented in calligraphy and painting ink bamboo and plum with delicate and elegant strokes. It is believed that she and her husband did paintings together. The calligraphy of herself, her husband and one of their three sons, Zhao Yong, were collected in a scroll by the Yuan Emperor Ayurbarwada (better known as the Emperor Ren). He commented that it was a rare thing for a husband, wife and son to all be talented in calligraphy. "The imperial seal was applied to these works and they became part of the Imperial Archives collection."