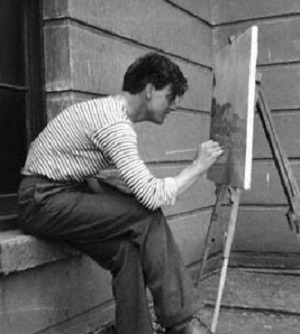 Frank Graham Bell (21 November 1910 – 9 August 1943), known as Graham, was a painter of portraits, landscapes and still-life, and a founder member of the realist Euston Road School. He was also a journalist and writer on art and the artist. Born in South Africa, he spent most of his career in Britain (1931-1943), where he died in a flying accident during World War II.

Frank Graham Bell was born on 21 November 1910 in present-day South Africa, in Durban or Transvaal Province. He had a younger brother, Geoffrey Graham Bell, who also became an artist.

He first worked in a bank and on a farm before turning to art. He studied at the Durban Art School, and held his first one-man exhibition at the City Hall in Durban in 1931.

In 1931 he moved to Britain together with Anne Bilbrough, a young actress whom he was later to marry and who was the mother of their only daughter Harriet. At first he was inspired by the work of Duncan Grant; then met William Coldstream. In 1934 under the influence of Geoffrey Tibble he showed non-representational works at the exhibition of Objective Abstractions at the Zwemmer Gallery.

Between 1934 and 1937 Bell abandoned painting and took up journalism. He contributed to the New Statesman and went on to become its arts editor.

Bell took up painting again, and in 1937 along with William Coldstream, Lawrence Gowing, Rodrigo Moynihan, Victor Pasmore and Claude Rogers, became a founder of the Euston Road School. This realist group of painters taught or studied at the school of painting and drawing which they set up at 316 Euston Road in London. They admired a tradition of painting derived from the work of Cézanne, reacting against avant-garde styles and asserting the importance of painting traditional subjects in a realist manner. Their programme was largely based on a political and social intention of creating a widely understandable and socially relevant art. Most members were socialists and some were members of the Communist Party. Many also were recording their times for posterity as part of the Mass Observation movement, but their work was not propagandist in the manner of Socialist Realism. The School was affiliated to the Artists’ International Association, and helped artists fleeing from Nazi Germany to resettle and find work.

In 1938 Rosenberg & Helft exhibited Bell's work in a mixed show, along with paintings by Victor Pasmore, Thomas Carr, Claude Rogers, William Coldstream and Geoffrey Tibble. In the same year Bell worked for Mass Observation in Bolton, with Humphrey Spender the photographer. (Their sketchbooks and photographs are conserved by Bolton Museum.)

In 1939 Bell published the pamphlet, The Artist And His Public, and wrote the Plan for Artists with Kenneth Clark, urging patronage for contemporary artists. As a result several of his contemporaries were able to become artists, whose careers might have ended because of financial necessity.

After the outbreak of World War II in 1939, Bell enlisted with the Royal Air Force and trained as a pilot. In about 1940 he painted some watercolors of Ewenny Priory and other sites in Glamorgan, as part of the 'Recording Britain' scheme, devised by Kenneth Clark and supported by the Pilgrim Trust. Later that year he trained as a pilot in the north of Britain.