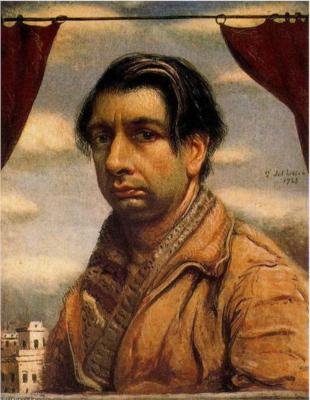 The founder of the Metaphysical art movement, Giorgio de Chirico was an Italian (Born in Volos,Greece)surrealist painter, whose work implied a metaphysical questioning of reality. After studying in Athens and Florence, he moved to Germany to study at the Academy of Fine Arts in Munich, where he was influenced by the writings of Nietzsche and Arthur Schopenhauer. On his way to Paris, De Chirico traveled back to Florence and later to Turin, where he was moved by the metaphysical beauty of the surroundings. He exhibited his works at the Salon des Independants for the first time in 1913, and sold his first painting, the Red Tower, later signing with the art dealer Paul Guillame.

Upon the outbreak of the First World War, De Chirico returned to Italy, and enlisted for the military. However, he was considered unfit for combat and was assigned to work in a military hospital. During this time, he continued to paint in his unique metaphysical style. In the fall of 1919, De Chirico published an article in an art publication, in which he advocated for a return to the classical iconography by such masters as Raphael and Signorelli. He also openly criticized modern art and became an outspoken opponent of it.

By 1939, he was painting in a neo-Baroque style, heavily influenced by Peter Paul Rubens, but his later works never received the critical praise that was lavished upon his earlier works. He resented the lack of praise for his later works, which he considered more mature and of better quality. Both for profit and as an act of revenge, De Chirico produced back-dated forgeries of his own works, and denounced many of his previous works as forgeries.

De Chirico continued to be a prolific artist, painting up until his 90th year. His paintings strongly influenced the surrealist movement, providing inspiration for such prominent artists as Max Ernst, Salvador Dali, Rene Magritte, and Philip Guston. His paintings have further helped inspire books, music and even video games.

Giorgio de Chirico (Italian: [ˈdʒordʒo deˈkiːriko]; 10 July 1888 – 20 November 1978) was an Italian artist and writer. In the years before World War I, he founded the scuola metafisica art movement, which profoundly influenced the surrealists. After 1919, he became interested in traditional painting techniques, and worked in a neoclassical or neo-Baroque style, while frequently revisiting the metaphysical themes of his earlier work.

De Chirico was born in Volos, Greece, to a Genoan mother and a Sicilian father. After studying art at Athens Polytechnic—mainly under the guidance of the influential Greek painters Georgios Roilos and Georgios Jakobides—and Florence, he moved to Germany in 1906, following his father's death in 1905. He entered the Academy of Fine Arts in Munich, where he studied under Max Klinger and read the writings of the philosophers Nietzsche, Arthur Schopenhauer and Otto Weininger. There, he also studied the works of Arnold Böcklin.

He returned to Italy in the summer of 1909 and spent six months in Milan. At the beginning of 1910, he moved to Florence where he painted the first of his 'Metaphysical Town Square' series, The Enigma of an Autumn Afternoon, after the revelation he felt in Piazza Santa Croce. He also painted The Enigma of the Oracle while in Florence. In July 1911 he spent a few days in Turin on his way to Paris. De Chirico was profoundly moved by what he called the 'metaphysical aspect' of Turin, especially the architecture of its archways and piazzas. De Chirico moved to Paris in July 1911, where he joined his brother Andrea. Through his brother he met Pierre Laprade, a member of the jury at the Salon d'Automne, where he exhibited three of his works: Enigma of the Oracle, Enigma of an Afternoon and Self-Portrait. During 1913 he exhibited paintings at the Salon des Indépendants and Salon d’Automne; his work was noticed by Pablo Picasso and Guillaume Apollinaire, and he sold his first painting, The Red Tower. In 1914, through Apollinaire, he met the art dealer Paul Guillaume, with whom he signed a contract for his artistic output.

At the outbreak of World War I, he returned to Italy. Upon his arrival in May 1915, he enlisted in the army, but he was considered unfit for work and assigned to the hospital at Ferrara. Here he met with Carlo Carrà and together they founded the pittura metafisica movement. He continued to paint, and in 1918, he transferred to Rome. Starting from 1918, his work was exhibited extensively in Europe.

De Chirico is best known for the paintings he produced between 1909 and 1919, his metaphysical period, which are characterized by haunted, brooding moods evoked by their images. At the start of this period, his subjects were still cityscapes inspired by the bright daylight of Mediterranean cities, but gradually he turned his attention to studies of cluttered storerooms, sometimes inhabited by mannequin-like hybrid figures.

In autumn, 1919, de Chirico published an article in Valori plastici entitled "The Return of Craftsmanship", in which he advocated a return to traditional methods and iconography. This article heralded an abrupt change in his artistic orientation, as he adopted a classicizing manner inspired by such old masters as Raphael and Signorelli, and became an outspoken opponent of modern art.