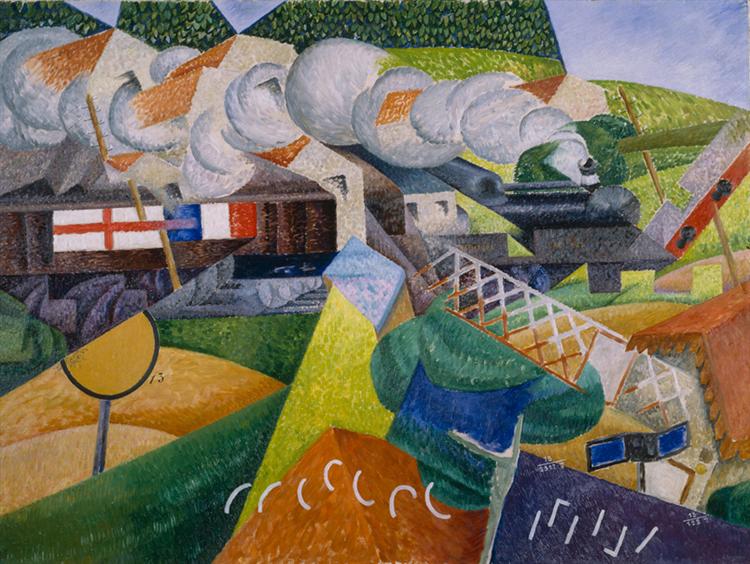 After moving from Rome to Paris in 1906, Gino Severini came into close contact with Georges Braque, Pablo Picasso, and the other leading artists of the avant-garde capital, while staying in touch with his compatriots who remained in Italy. In 1910 he signed the “Futurist Painting: Technical Manifesto” with four other Italian artists, Giacomo Balla, Umberto Boccioni, Carlo Carrà, and Luigi Russolo, who wanted their paintings to express the energy and speed of modern life.

In this painting of a train moving through the countryside, Severini split the landscape in order to impart a sense of the momentary fractured images that characterize our perception of a speeding object. The clash of intense contrasting colors suggests the noise and power of the train, which the Futurists admired as an emblem of vitality and potency.

Severini’s paintings—like Futurist work in general—are informed by the legacy of Cubism, building on the Cubists’ deconstruction of the motif, their collage technique, and their incorporation of graphic signs. But the Futurists’ interest in depicting motion, use of bright expressive color, and politically inspired dedication to bridging the gap between art and life departed decisively from Cubist aesthetic practice, which focused on the rarefied world of the studio, investigating formal issues through often-somber portraits and still lifes.

Severini painted this canvas in the midst of World War I while living in Igny, outside Paris. Years later he recalled the circumstances: “Next to our hovel, trains were passing day and night, full of war matériel, or soldiers, and wounded.” During 1915 he created many canvases in which he attempted to evoke war in paint, culminating in his January 1916 First Futurist Exhibition of Plastic Art of the War. This exhibition, held in Paris, included Red Cross Train Passing a Village.