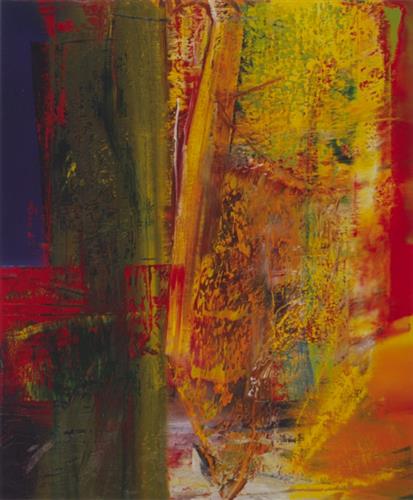 Oelberg (1986) represents Richter’s mature abstract style. The most significant innovation in his 1980s abstract paintings was the use of a plastic spatula as an additional tool for applying paint and achieving special painterly effects. Richter’s spatulas varied in size; the largest was three meters in length and could imitate the effects of large paintbrushes. He also used other tools, like squeegees, palette knives, wooden utensils, and different types of brushes.

To understand the evolvement of Richter’s abstract style, we need to understand the process of creation of paintings like Oelberg. The artist developed such paintings through multiple layers of paint. Throughout the 1980s, Richter worked on integrating these layers into compelling artwork. At first, Richter stretched the large canvas on the floor applied diluted paint in tones of yellow, orange, red, green, and blue. This initial layer served as a base for working with the spatula. Many times this layer had geometric shapes that became obscured in the final painting. Richter often left some of the under-layers visible, usually on the edges of the canvas. In Oelberg, the under-layer is seen in the blue rectangle in the upper left corner of the canvas, and in the yellow, pink, and green along the lower edge of the painting. In the following phase, Richter would mount the painting on the wall and then work on the second layer with the help of the spatula. The top layers were applied with the spatula, starting from the top and moving downward to imitate the effect of broad downward brushstrokes. Richter worked with the edge of the spatula, adjusting and changing the pressure to control the density of the color and create diverse painterly effects. For instance, the slow pulling of the thick paint produced the broad lines of paint that stretch-out over the surface. Finally, to complete the last details on Oelberg, Richter most likely worked with large brushes.

The title of the painting, Oelberg, has multiple layers of meaning. On a personal level, it relates to the name of the street in which the grandparents of Richter’s former wife, the artist Isa Genzken, reside (Richter and Genzken were together between 1982 and 1993). Oelberg is also the name of the highest hill in the Sieben Mountain range southeast of Bonn. Additionally, it was the original name of the Mount of Olives in the New Testament. Like the multi-layered painting, the title can be associated with Richter’s personal life, a natural setting, and a Biblical reference. As the title suggests, the viewer can find some elements of a landscape in the abstract vision of Oelberg.

Similarly, Richter often created a blur effect in his photo-paintings, as in Child on a Horse (1965), that gave the image an abstract quality. It reflected the tension between the figurative and the abstract in Richter’s paintings. Richter continued to produce elaborate abstract paintings like Oelberg until 1988, at which point he once again turned his attention to figurative painting, creating the series 18 Oktober 1977.