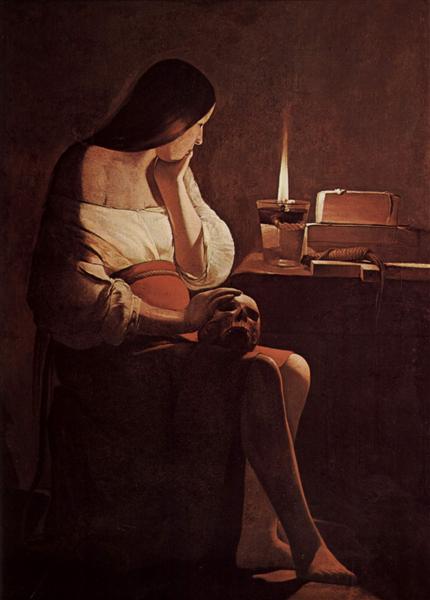 Magdalene with the Smoking Flame (also titled in French La Madeleine à la veilleuse, and La Madeleine à la flamme filante) is an oil-on-canvas depiction of Mary Magdalene by French Baroque painter Georges de La Tour, painted in 1640. This version of the painting is currently held and exhibited at the Los Angeles County Museum of Art and the Louvre Museum (La Madeleine a la veilleuse). Other paintings by La Tour containing the Penitent Magdalene are exhibited at the New York Metropolitan Museum of Art, the National Gallery of Art, and the Louvre

Bought in 1949 from the French Administration des Douanes. In the somewhat uncertain chronology of Georges de La Tour's work, this painting has been allotted the date of 1640, by analogy with the Saint Mary with a Mirror, which has been dated between 1635 and 1645.[2]

During the 17th century, great devotion was shown to Mary Magdalene in all Catholic countries. She was the perfect lover of Christ, her beauty made yet more appealing by reason of her repentance, which had a special attraction for a period so passionately interested in problems of mysticism, quietism and asceticism. The theme of the repentance of sinners and trials sent by God is illustrated in such subjects as the Repentance of St. Peter, Mary Magdalene and Job.[3] A number of written works give evidence of the cult of the Magdalene[4] and this cult was the more widespread since Provence owned two great sanctuaries dedicated to her: the grotto of La Sainte-Baume, and the Saintes-Maries-de-la-Mer.[5] It has been suggested that Georges de La Tour took a gypsy as his model: at the time, there were many in Lorraine where he painted this picture.[6]

This painting and the Mirror one mentioned above, seem to have been inspired by several themes popular with Italian and Dutch artists: the repentant Magdalene, Melancholy, and Vanity. The artist has given it a feeling of philosophical meditation in keeping with the spirit of the time; the subject's body is enveloped in mysterious darkness, and her face illumined only by the candle. On her knees a skull (for the Golgotha), on the table some books and a candle, and, on a wooden cross, a blood-stained scourge.

The painting appears in Ariel's Grotto during the song "Part of Your World" in the 1989 film The Little Mermaid.