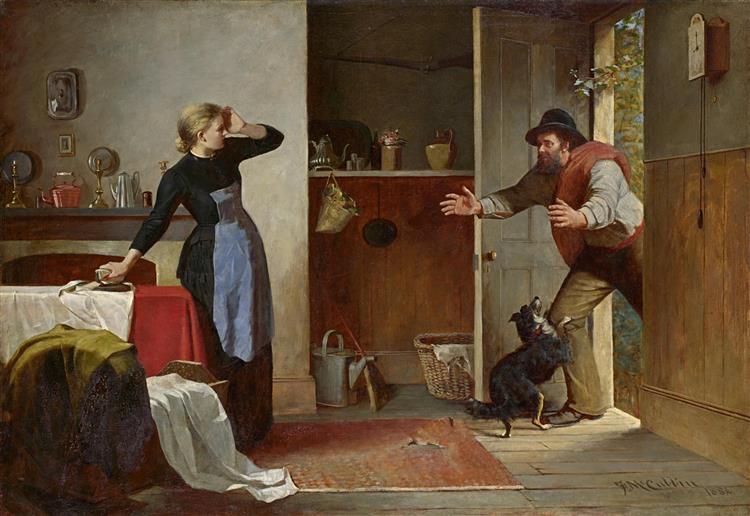 Home Again (1884) was one of Frederick McCubbin’s early paintings, created while he was a student at the National Gallery of Victoria Art School in Melbourne. McCubbin painted a domestic scene, which emphasized the woman’s role and responsibility for the family’s livelihood. Elements of the interior display how the young woman maintained the household while believing she was abandoned or widowed. The painting captures the dramatic moment of the husband bursting through the door to her surprise and the delight of the household pet.

At the time, McCubbin was studying under George Folingsby, who was appointed painting master at the National Gallery of Victoria Art School in 1882. Folingsby, an Irishman, was already an established portrait and history painter when he left Europe to immigrate to Australia. His genre paintings usually referenced historical or literary themes, such as The First meeting between Henry VIII and Anne Boleyn (1879). He was also responsible for the reorganization of the teaching methods at the school, by stopping the students from copying paintings in the gallery and encouraging them to sketch and paint from life. Folingsby was an essential influence on McCubbin during his formative years. Home Again demonstrates how McCubbin applied Folingsby’s theories to create a local contemporary setting. The popular press often published illustrated scenes of the bush and everyday life. Since McCubbin worked as an illustrator, it is possible that Home again was inspired by a story in a popular magazine, a play, or a novel. This type of interior and composition of a figure entering a room was often repeated by final-year students at the Gallery School because these were similar to Folingsby’s work.

The setting of Home Again might have been the kitchen at the McCubbin family household at King Street. The same interior is seen in its entirety in another painting by McCubbin, Kitchen at the old King Street bakery (1884). Although it is not certain, scholars have speculated that McCubbin created other paintings from the period in the vicinity of the family home and bakery: Girl with a bird at the King Street bakery (1886) and Old Stables (ca. 1884). Home Again was first exhibited at the 2nd Annual Student Exhibition of the Gallery in 1884. The painting received favorable reviews from the press, and it won second prize at the exhibition (a reward of 20₤). Despite it being an early work, certain elements are indicative of McCubbin’s future style. In terms of subject matter, it can be seen as a forerunner of McCubbin’s significant works that depicted daily activities of pioneer couples like On the Wallaby Track (1896) and The pioneer (1904). Besides, the glimpse of the sunlit garden through the open door shows a little of McCubbin’s future landscape paintings.

In the early 1980s, the painting was discovered in possession of the Bickley family. The McCubbins and Bickleys were both involved in the baking trade and had traveled on the same ship that came from England to Melbourne. Shortly after it resurfaced, Home Again was acquired by the National Gallery of Victoria, and today it is available to the public as part of the gallery display.