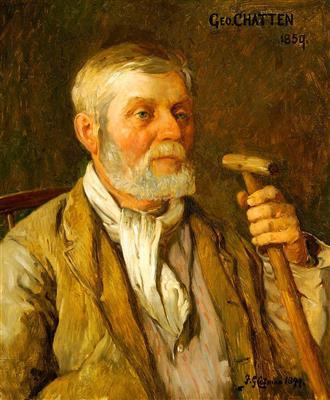 Frederick George Cotman (1850–1920) was an English painter of landscapes, portraits and interiors and a member of the Norwich School of painters.


Frederick George Cotman, was born at 186 Wykes Bishop Street, Ipswich on 14 August 1850, the youngest child of Henry Edmund Cotman (1802–1871), a Norwich silk merchant and his wife Maria Taylor (1813–1895). He was the nephew of John Sell Cotman and the cousin of John Joseph Cotman. He was a private pupil of William Thomson Griffiths, the Head of Ipswich School of Art.


Cotman is tenuously linked with the Norwich School of painters because of his family connection with John Sell Cotman, who was one of its leading artists. He never lived in Norfolk, unlike so many of the artists of the school.


He worked in both oil and watercolours. His best known work, One of the Family, is now held by the Walker Art Gallery in Liverpool. Throughout his career, which was generally spent in London, he created over thirty paintings. He was a founder member of the influential Ipswich Art Club, and remained a member of it all his life.