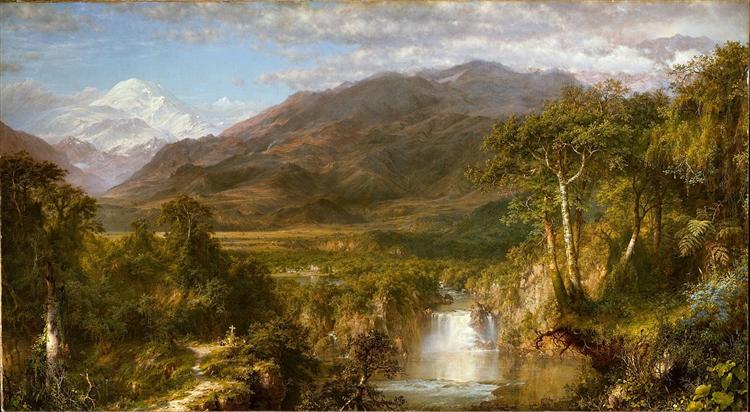 Heart of the Andes

The Heart of the Andes is a large oil-on-canvas landscape painting by the American artist Frederic Edwin Church (1826–1900).

At more than five feet (1.7 metres) high and almost ten feet (3 metres) wide, it depicts an idealized landscape in the South American Andes, where Church traveled on two occasions. Its exhibition in 1859 was a sensation, and the painting established Church as the foremost landscape painter in the United States. It has been in the collection of New York's Metropolitan Museum of Art since 1909, and is among Church's most renowned works.

In 1853 and again in 1857, Church traveled in Ecuador and Colombia, financed by businessman Cyrus West Field, who wished to use Church's paintings to lure investors to his South American ventures. Church was inspired by the Prussian naturalist and explorer Alexander von Humboldt, and his 1845 treatise Kosmos. Humboldt was among the last of the great scientific generalists, and his fame was similar to that of Albert Einstein a century later. In the second volume of Kosmos, Humboldt included a chapter on the influence of landscape painting on the study of the natural world—ranking that art among the highest expressions of the love of nature—and challenging artists to portray the "physiognomy" of the landscape. Church retraced Humboldt's travels in South America.

The Heart of the Andes is a composite of the South American topography observed by Church during his travels. At the center right of the mountain landscape is a shimmering pool served by a waterfall. The snow-capped, majestic Mount Chimborazo of Ecuador appears in the distance; the viewer's eye is led to it by the darker, closer slopes that decline from right to left. The evidence of human presence consists of a lightly worn path that fades away, a hamlet and church lying in the central plain, and closer to the foreground, two natives are seen before a cross. The church, a trademark detail in Church's paintings, is Catholic and Spanish-colonial, and seemingly inaccessible from the viewer's location. Church's signature appears cut into the bark of the highlighted foreground tree at left. The play of light on his signature has been interpreted as the artist's statement of man's ability to tame nature—yet the tree appears in poor health compared to the vivid jungle surrounding it.

Church's landscape conformed to the aesthetic principles of the picturesque, as propounded by the British theorist William Gilpin, which began with a careful observation of nature that was then enhanced by particular notions about composition and harmony. The juxtaposition of smooth and irregular forms was an important principle, and is represented in The Heart of the Andes by the rounded hills and pool of water on the one hand, and by the contrasting jagged mountains and rough trees on the other.

The theory of British critic John Ruskin was also an important influence on Church. Ruskin's Modern Painters was a five-volume treatise on art that was, according to American artist Worthington Whittredge, "in every landscape painter's hand" by mid-century. Ruskin emphasized the scrutiny of nature, and he viewed art, morality, and the natural world as spiritually unified. Following this theme, the painting displays the landscape in detail at all scales, from the intricate foliage, birds, and butterflies in the foreground to the all-encompassing portrayal of the natural environments studied by Church. The presence of the cross suggests the peaceful coexistence of religion with the landscape.