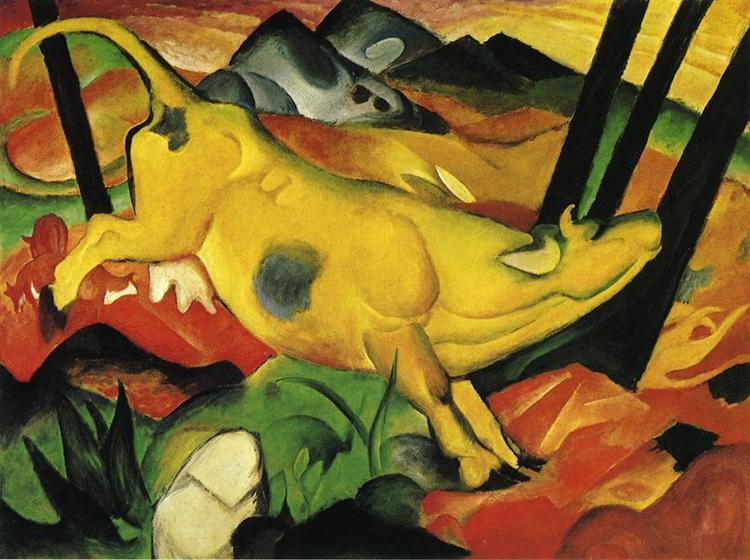 The Yellow Cow (1911) is one of the first examples that exhibit Marc's mature style. It stands in contrast with Marc's early style, and his previous depictions of animals, in paintings such as Deer at Dusk (1909) and Grazing Horses (1910). These paintings were naturalistic and reflected many hours spent painting outdoors. From the outset, Marc was drawn to nature, to the movement and behavior of animals. He was not unique here, as 'back to nature' movement swept Germany at the beginning of the 20th century. Artistic collectives and nudist colonies emerged in agricultural areas in response to an overall dissatisfaction with an increasingly materialistic and secular society. Artists sought a more essential and spiritual existence in nature, and eventually, Marc left the city for the small Bavarian village, Sindelsdorf. As Deer at Dusk and Grazing Horses show, Marc sketched and observed cows and horses in the meadows of Bavaria and deer in the forest. For Marc, animals had certain godliness and spirituality that man no longer possessed. Animals were his primary subjects throughout his artistic evolution.

In The Yellow Cow, the artist strived to convey his spiritual ideals, and his primary means of expression was color. Marc's interest in color can be traced to his admiration for Vincent Van Gogh, who developed a theory of color symbolism. From his correspondences, we know that Marc discussed Van Gogh's perception of color with fellow artists August Macke and Wassily Kandinsky. Marc formed his color theory: he ascribed characteristics to each color and outlined complementary and harmonious color combinations. Blue related to masculinity, spirituality, and severity, and yellow represented femininity, qualities of joy, gentility, and sensuality. The third primary color, red, represented matter, it was brutal and heavy and opposed to the other two.

The Yellow Cow embodies Marc's female principle by exuding joyfulness and abundance. In order to balance the yellow, Marc created a vibrant landscape with patches of red, blue and green. According to one interpretation, The Yellow Cow is a private wedding portrait that Marc made in honor of his union with Maria Franck in 1911. The pair attempted to get the necessary permits to get married in Germany, but they were denied twice. In 1911, they traveled to England to get married, even though their marriage was not legally valid in Germany. Still, the couple resided together and considered themselves husband and wife. In the painting, the cow would represent Maria, and Marc's self-portrait would be veiled in the blue mountains in the background. Whether this interpretation is accurate or not, the painting has a jubilant and cheerful quality. This quality sets it apart from other paintings by Marc, which had a dark and ominous tone. For example, Fate of the Animals (1913) shows the animals as innocent victims caught in flames, fleeing, and struggling.

Yellow Cow (German: Gelbe Kuh) is a painting by the German artist Franz Marc, dating to 1911. It is one of the artist’s most well known works, and is one of several of his depictions of animals in Expressionist style. This work is oil on canvas and measures 140.5 x 189.2 centimeters. The central motif of the Yellow Cow painting is a jumping cow, surrounded by a colorful, structured landscape. The painting is characterized by the contrast between the dynamic central motif and the calm background.

Yellow Cow dates to Marc’s formative phase, during which he developed the Farbsymbolik (color symbolism) that permeates the painting. For Marc, blue was equated with spirituality and maleness, yellow with femininity and sensuality, and red with the earth. The colors in the painting should therefore not be taken as naturalistic, but rather, as symbolically representing the sense of the objects in the work.

Marc's use of color (in this work and others) was greatly influenced by the Russian painter Wassily Kandinsky.

According to art historian Mark Rosenthal, Yellow Cow can be seen as a veiled depiction of Marc’s wife, Maria Franck, whom he married the same year the painting was created.