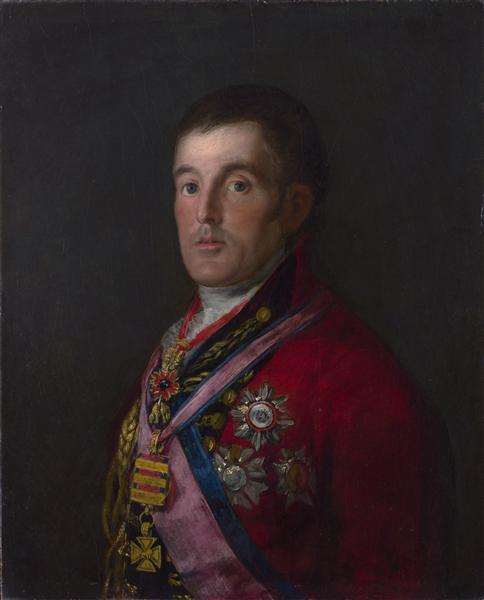 The Duke of Wellington

The Portrait of the Duke of Wellington is a painting by the Spanish artist Francisco Goya of the British general Arthur Wellesley, 1st Duke of Wellington during the latter's service in the Peninsular War. One of three portraits Goya painted of Wellington, it was begun in 1812, after the subject's entry into Madrid, showing him as an earl in red uniform and wearing the Peninsular Medal. The artist then modified it in 1814 to show him in full dress black uniform with gold braid and to add the Order of the Golden Fleece and Military Gold Cross with three clasps (both of which Wellington had been awarded in the interim).

The property of the 11th Duke of Leeds, it was auctioned in 1961, with the New York collector Charles Wrightsman bidding £140,000. The Wolfson Foundation offered £100,000 and the government added a special Treasury grant of £40,000, matching Wrightsman's bid and obtaining the painting for the National Gallery in London, where it was first put on display on 2 August 1961. It was stolen nineteen days later, on 21 August 1961. It was later returned and Kempton Bunton confessed to taking the painting and its frame in July 1965. Following a high-profile trial in which he was defended by Jeremy Hutchinson, QC, Bunton was found not guilty of stealing the painting, but guilty of stealing the frame.

The theft entered popular culture, as it was referenced in the 1962 James Bond film Dr. No. In the film, the painting was on display in Dr. Julius No's lair, suggesting the first Bond villain had stolen the work.