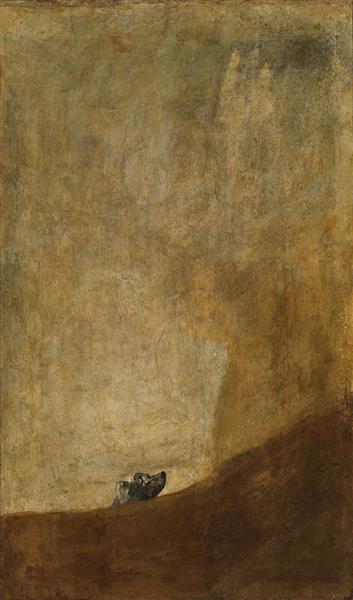 The Dog is the name usually given to a painting by Spanish artist Francisco Goya, now in the Museo del Prado, Madrid. It shows the head of a small dog gazing upwards. The dog itself is almost lost in the vastness of the rest of the image, which is empty except for a dark sloping area near the bottom of the picture: an unidentifiable mass which conceals the animal's body.

The Dog is one of Goya's Black Paintings, which he painted directly onto the walls of his house sometime between 1819 and 1823 when he was in his mid 70s, living alone and suffering from acute mental and physical distress. He did not intend the paintings for public exhibition (they were not removed from the house until 50 years after Goya had left), so it is unlikely that he gave them titles.

In 1819, Goya purchased a house named "Quinta del Sordo" ("Villa of the Deaf Man") on the banks of the Manzanares near Madrid. It was a small two-story house which was named after a previous occupant who had been deaf, though Goya also happened to be functionally deaf, as a result of an illness he had contracted (probably lead poisoning) in 1792. Between 1819 and 1823, when he moved to Bordeaux, Goya produced a series of 14 works, which he painted with oils directly onto the walls of the house.

At the age of 73, and having survived two life-threatening illnesses, Goya was likely to have been concerned with his own mortality, and was increasingly embittered by the conflicts that had engulfed Spain in the decade preceding his move to the Quinta del Sordo, and the developing civil strife–indeed, Goya was completing the plates that formed his series The Disasters of War during this period. Although he initially decorated the rooms of the house with more inspiring images, in time he overpainted all of them with the intense haunting pictures known today as the Black Paintings. Uncommissioned and never meant for public display, these pictures reflect his darkening mood, with their depictions of intense scenes of malevolence, conflict and despair.

If Goya gave titles to the works he produced at the Quinta del Sordo he never revealed what they were; the names by which they are now known were assigned by others after his death, and this painting is often identified by variations on the common title: A Dog, Head of a Dog, The Buried Dog, The Half-Drowned Dog, The Half-Submerged Dog; more colloquially as "Goya's Dog"; or by the Spanish names El Perro or Perro Semihundido.

The painting is divided into two unequal sections: an upper, dirty ochre "sky" and a smaller sloping curved dark brown section which fades to black as it slopes up to the right. Over the top of this lower section the dog's head can be seen, its snout lifted, its ears pulled back and its eyes looking up and towards the right. A faint dark shape looms over the dog; this is sometimes considered to be damage or an intentional inclusion, but is generally seen as an artifact from the earlier painting that decorated the wall before Goya overpainted it with The Dog.