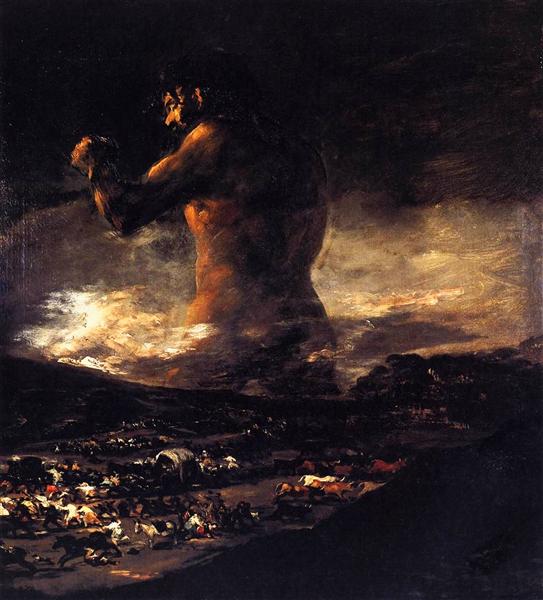 The Colossus (also known as The Giant), is known in Spanish as El Coloso and also El Gigante (The Giant), El Pánico (The Panic) and La Tormenta (The Storm). It is a painting traditionally attributed to Francisco de Goya that shows a giant in the centre of the canvas walking towards the left hand side of the picture. Mountains obscure his legs up to his thighs and clouds surround his body; the giant appears to be adopting an aggressive posture as he is holding one of his fists up at shoulder height. A dark valley containing a crowd of people and herds of cattle fleeing in all directions occupies the lower third of the painting.

The painting became the property of Goya's son, Javier Goya, in 1812. The painting was later owned by Pedro Fernández Durán, who bequeathed his collection to Madrid's Museo del Prado, where it has been kept since 1931.

The painting became part of the Museo del Prado's collection in 1931, when it was donated by the estate of Pedro Fernández Durán. The first documented attribution of the painting to Goya dates from 1946 when Francisco Javier Sánchez Cantón published the inventory of the estate of Josefa Bayeu, Goya's wife, on her death in 1812. The inventory describes a painting of "a giant" with the same measurements as The Colossus, which was identified with an X (Xavier Goya) and the number 18.

The painting was passed into the ownership of Miguel Fernández Durán Fernández de Pinedo y Bizarrón, Marquis of Perales, as he left it to his great-grandson, Pedro Fernández Durán on his death in 1833. The painting is listed in the notarised estate of Paula Bernaldo de Quirós (Marchioness of Perales and Tolosa and mother of Pedro Fernández Durán) on her death in 1877. At this time the painting was described as "A prophetic allegory of the misfortunes that took place during the War of Independence, Goya original, measuring 1.15 by 1.[0]3 (global measurement units) ( having a value of one thousand five hundred pesetas".

More recently, the questions raised regarding the authorship of The Colossus and its absence from the Prado's exhibition Goya in wartime have focussed attention on, among other matters, Goya's etching of the same theme, which was included in the same exhibition (exhibition catalogue number 28). In an article entitled "Artistic technique as a research method relating to Goya's 'The Colossus'" (in the journal Goya № 324) Jesusa Vega established the relationship between the etching known as The Giant (of which there is second copy in the Spanish National Library in Madrid) and The Colossus in these words: "the giant, moves from resistance / defence, proud and erect, to slumped melancholy, reflecting the mood of many Spaniards, a collective feeling shared by its creator". If the painting is attributed as being painted between 1808—the start of the Peninsular War—and 1812—when the painting is recorded as being among the goods divided between Goya and his son Javier—then the print should be dated as originating after the end of the war due to the technique and materials used in the series of etchings The Disasters of War.