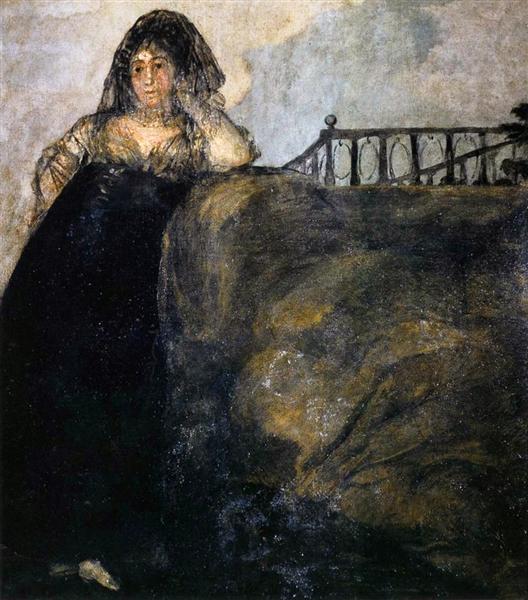 La Leocadia (Spanish: Doña Leocadia) or The Seductress (Spanish: Una Manola) are names given to a mural by the Spanish artist Francisco Goya (1746–1828), completed sometime between 1819–23, as one of his series of 14 Black Paintings. It shows a woman commonly identified as Goya's maid, companion and, most likely lover, Leocadia Weiss. She is dressed in a dark, almost funeral maja dress, and leans against what is either a mantelpiece or burial mound, as she looks outward at the viewer with a sorrowful expression. Leocadia is one of the final of the "Black Paintings", which he painted in his seventies at a time when he was consumed by political, physical and psychological turmoil, after he fled to the country from his position as court painter in Madrid.

According to the c. 1828–30 inventory of his friend Antonio Brugada, Leocadia was situated in the ground floor of his villa which Lawrence Gowing observes was thematically divided: a male side of Saturn Devouring His Son, A Pilgrimage to San Isidro; and a female side compromising Judith and Holofernes, Aquelarre and Leocadia. All the works in the series were transferred to canvas after Goya's death and are now in the Museo del Prado in Madrid.

In 1819, Goya purchased the Quinta del Sordo ("Villa of the Deaf Man") situated on the banks of the Manzanares near Madrid. This small two-story house was named after a previous occupant who had been deaf, though Goya himself, by coincidence, had been functionally deaf for more than two decades, the result of an illness contracted in 1792. At the age of 73, and having survived two life-threatening illnesses, Goya was likely to have been concerned with his own mortality, and was increasingly embittered by the conflicts that engulfed Spain in the decade preceding his move to the Quinta del Sordo, and the developing Spanish Civil War of 1820–1823 and the civil strife — indeed, Goya was completing the plates that formed his series The Disasters of War during this period.

Between 1819 and 1823, before he moved to Bordeaux in 1824, he produced a series of 14 works, which he painted with oils directly onto the walls of his Spanish house. Although he first decorated the rooms of the house with more inspiring images, in time he painted over them with the intense and haunted pictures known today as the Black Paintings — one of which was the portrait of Leocadia. Uncommissioned and never meant for public display, these pictures reflect his darkening mood, with their depictions of intense scenes of malevolence, conflict and despair. If Goya gave titles to the works he produced at the Quinta del Sordo, he never revealed what they were; the names by which they are now known were assigned by others after his death, and the paintings are often identified by variations on the common title. Goya left Spain and Quinta del Sordo in 1824 for exile in France, where he was joined by his housekeeper Leocadia Weiss and her ten-year-old daughter, Rosario, possibly Goya's child.