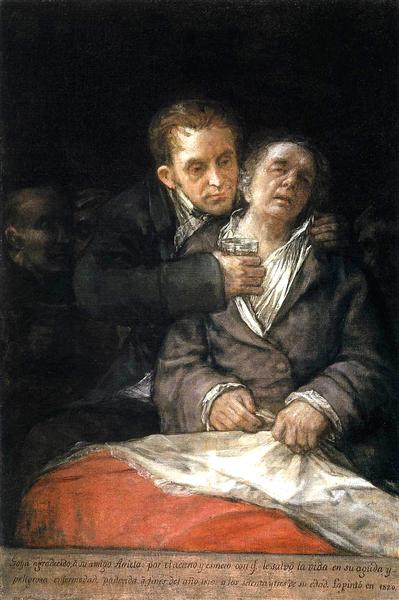 Self-portrait with Dr Arrieta is the name given to a painting by Spanish artist Francisco Goya. The work is an oil painting on canvas which was created in 1820. It is held in Minneapolis Institute of Art, Minnesota.

In 1792, Goya developed a sudden serious illness which included dizziness, weakness, delirium, sickness, abdominal pain, deafness, and partial blindness. By the time he returned to Madrid, in 1793, Goya was completely deaf. Various diagnoses of this serious illness have been offered: syphilis, lead poisoning, cerebrovascular disease, acute infection of the central nervous system, and the rare condition of Vogt-Koyanagi-Harada syndrome—temporary inflammation of the uveal tract associated with permanent deafness. In 1819 Goya had a second serious illness. Little information is available either on the nature of the illness or on Dr Arrieta's treatment. The painting is the main source, and an inscription below the figures explains why Goya made the picture: “Goya, in gratitude to his friend Arrieta: for the compassion and care with which he saved his life during the acute and dangerous illness he suffered towards the end of the year 1819 in his seventy-third year. He painted it in 1820“.

Goya is seated on his bed obviously weak from his illness. He grasps his bed-sheet as if clinging on to life and is supported from falling backwards by the arm of Arrieta. The doctor gently encourages his patient to take the medicine. Shadowy figures—perhaps his servants and a priest—in the background seem to be portents of doom. Goya may have expected to die, but under Arrieta's care, he was nursed back to health and lived another eight years. Self Portrait with Dr Arrieta is an image of hope amidst despair and the colours are correspondingly more delicate and lighter than in other works of this period.

The work was a present for Arrieta. It was painted in gratitude for the gift of life, not as a memento mori. It is uncertain how long the painting remained in Arrieta's possession. In 1820 he travelled to Africa to research bubonic plague, and it is probable that the painting remained in Spain. By 1860, when exhibited in Madrid, it was in the collection of Mr Martinez of Madrid. Later the painting was recorded in various private collections in Paris before being acquired by the Minneapolis Institute of Art.