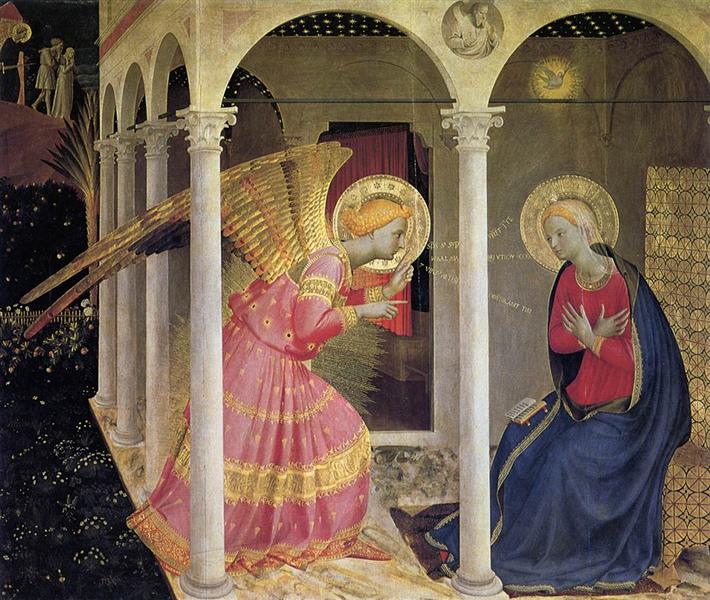 The Annunciation of Cortona is a panel-painting altarpiece or retable by Fra Angelico: once housed in the Church of Gesù of Cortona, it is now held at the Museo Diocesano in Cortona.

This is one of three Annunciations by Fra Angelico on the table (the other two are in the Prado Museum, and the Museo della Basilica di Santa Maria delle Grazie, in San Giovanni Valdarno. Two others, in fresco, are found in the convent of San Marco, Florence, at the top of the access stairs and the third cell.

There are also scenes of the theme combined with Adoration of the Magi at the Museum San Marco, and a diptych in the Galleria Nazionale dell'Umbria.

The scene is typical of Christian iconography, "The Annunciation to Mary by the Archangel Gabriel", is described in the Gospels and in great detail in The Golden Legend of Jacobus de Voragine, the reference book of painters of the Renaissance, which can be represented in all its symbolic (walled garden column, the presence of the Holy Spirit, an evocation of Adam and Eve expelled from Paradise).

This work is the main panel of a polyptych work, which includes a multi predella panels with scenes from the Life of the Virgin at the same Annunciazione di San Giovanni Valdarno:

They are also attributed to Zanobi Strozzi, an assistant of Fra Angelico.

On the left, the scene of invoking the original sin, is consistent with the principles of the Christian iconography of the painting: the pair of Adam and Eve expelled from Paradise is situated outside the walled garden of Mary, set off on a hill beyond a fence.

Conversely from other Annunciations of Fra Angelico, the vanishing point of perspective is in focus monofocal the left of the table.

Interesting about the annunciation scene are the three lines of text painted between the Archangel on the left and the Virgin on the right. The words of the angel are written on two lines, reading from left to right. The words of Mary are between those two lines. If we look attentively we see that her words are written upside-down. But that is not all. Mary's reply is also written backwards. As a consequence we have to stand upside-down, reading from right to left, to discover what she is saying. This indicates to the viewer that the words are addressed to God, who would be in the proper position to read them.