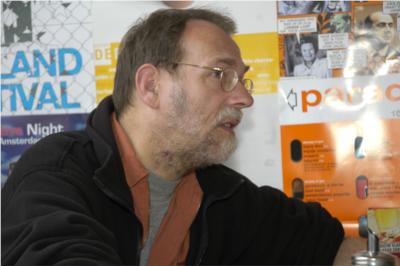 Fons Heijnsbroek, abstract painter
Fons Heijnsbroek is a Dutch painter-artist, living and working in Amsterdam, the Netherlands.
He mainly painted Abstract Expressionism in watercolor paintings on paper and acrylic paint on canvas.

Fons Heijnsbroek was born 22 December 1951 in the small old town Schiedam, nearby Rotterdam.
In 1958 his family moved to the Hague and later to Krommenie, in the area to the North of of Amsterdam.
It was in 1973 that Fons Heijnsbroek moved as a student to Amsterdam, to live there and to follow Social Pedagogy from 1973 till 1983.
He loved visiting the Dutch museums with their collections of the famous landscape-painters from The Netherlands, Germany, France and England - 17th century painters, The English Romantic landscape painters,Barbizon, French Impressionism and German Expressionism manily.

In 1985 Heijnsbroek started his art-study at the Academy of Art in Utrecht to become a sculptor-artist. He did visit the Art Academy for for only two years without finishing this study and departed with the idea to become a painter instead of a sculptor.
In 1987 he started to become an independent artist and had his first exhibitions in Amsterdam.
He started with figurative paintings and drawings, still inspired by German Expressionist painters. Religious subjects and questions played partly a strong role till 1989.

Heijnsbroek learned himself a lot about modern painting art by visiting frequently the Stedelijk Museum in Amsterdam where he found a.o. painting by Willem de kooning and Bram van Velde. He also found in those years some important colleague-artists in Amsterdam which became very important for his artistic development: the abstract painter Daan Lemaire and the figurative expressionist painter Paul Werner. In particular Daan Lemaire became important in developing and encouraging the abstract approach in his painting art, which Fons Heijnsbroek started from 1989.

It were in particular the artists of American - and European - Abstract Expressionism and their characteristic emotional and individualistic attitude which attracted Heijnsbroek in his own early abstract years.
But still many of his abstract and dynamic painted canvasses in 1989 - 1991 found there source in his sketches of the typical Dutch landscape and its skies.
Heijnsbroek loved to wander through the dunes and along the North-sea, close to Harlem and Zandvoort. The landscape offered him structures for his compositions.