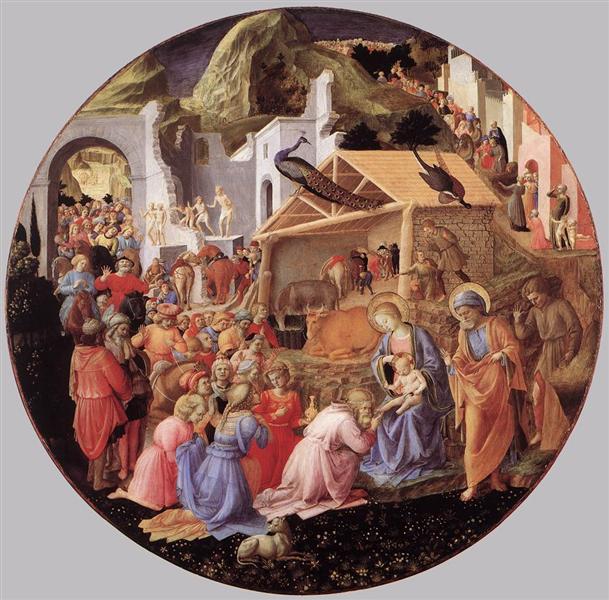 Adoration of the Magi

The Adoration of the Magi is a tondo, or circular painting, of the Adoration of the Magi assumed to be that recorded in 1492 in the Palazzo Medici Riccardi in Florence as by Fra Angelico. It dates from the mid-15th century and is now in the National Gallery of Art in Washington D.C. Most art historians think that Filippo Lippi painted more of the original work, and that it was added to some years after by other artists, as well as including work by assistants in the workshops of both the original masters. It has been known as the Washington Tondo and Cook Tondo after a former owner, and this latter name in particular continues to be used over 50 years after the painting left the Cook collection.

Art historians are agreed that the painting was produced over a considerable period, with significant changes in the composition, and contributions from a number of hands. While some are critical of the discordances this history has produced, for John Walker, the second director of the National Gallery of Art, the result was

The painting shows the three Magi or "kings" presenting their gifts to the infant Jesus, who is held by his mother. Saint Joseph stands beside her, and the manger, ox and ass of the usual depiction of the Nativity are behind this main group. Thus far the composition contains the inevitable components in a very standard arrangement.

As very often, the subject has been combined with the Adoration of the Shepherds, who are represented by three figures in ragged dress, one behind Joseph, and two at the right side of the stable building behind. Only the first of these is looking at Jesus and Mary, from an oblique angle almost behind them. Of the other two, the kneeling one points in the direction of the manger, well behind the sacred figures. The manger is placed outside the stable, and the ox and ass are also in the open air. The interior of the stable is occupied by what are presumably the Magi's horses and their grooms, removing their tack and in one case checking a horseshoe.

Behind the magi on the left a large procession of their retinues continue to arrive, passing through an arch that is part of a large ruined structure. To the right of the main group the city walls of Bethlehem run up a steep slope, with a road or path running in front of the walls. Down this another large group, presumably more of the Magis' parties, is coming, riding on camels and horses. A number of townsfolk have come out through a gateway in the walls, and are looking and pointing, in one case kneeling in prayer, but all looking in a different direction from the final location of the main figures. At the top of the hill a large but indistinctly painted group form a crowd, perhaps funnelling down the narrow path.