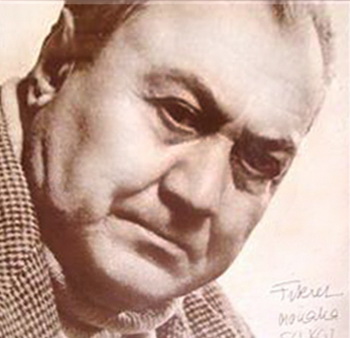 Fikret Muallâ Saygı (1904 in Kadıköy, Istanbul, Turkey – July 20, 1967 in Reillanne, France) was a 20th-century avant-garde painter of Turkish descent. His work reflects influences from Expressionism and Fauvism, with subject matter focusing on Paris street life, social gatherings such as cafés and circuses.

He was born in Kadıköy, Istanbul, but lived and worked in Paris, a long time since 1939 as an artist.

Fikret Mualla was very much loved by his mother. This relationship played an important role in his later life. At the age of 12, he was crippled in his right foot when he kicked hardly to imitate his uncle Hikmet Topuzer, a footballer for Fenerbahçe SK. Not long after, he lost his mother to a grippe epidemic. His father remarried a very young woman, however Fikret Mualla did not accept his stepmother.

After high school, his father sent him to Zurich, Switzerland to study engineering. Fikret Mualla left Switzerland soon to settle in Berlin, Germany. A childhood accident, leaving Mualla with a bad physical condition, contributed to his erratic personality and mental disorder in his adult years. He was institutionalized a number of times, for alcohol dependency and extreme paranoia. In 1928, he was hospitalised in Berlin due to delirium. He then went to Paris, the capital of arts and the centre of unlimited freedom for him. However, he was forced to return home as he did not receive any more money from his father.

In Istanbul, he was deemed to have normal mental health after a three-day stay in Bakırköy Psychiatric Hospital. Fikret Mualla was appointed as a teacher for drawing in a high school in Ayvalık. However, he quit this position and moved to Beyoğlu, a neighborhood in Istanbul. He tried his hand, for a while, at writing and drawing. He became friends with soprano Semiha Berksoy, writer Nazım Hikmet and painter Abidin Dino. His first exhibition in 1934 containing drawings, watercolor paintings and designs did not gain much attention. In 1936, he was hospitalised again for about a year. After his release, he decided to leave Turkey, where he felt he was not understood. Before he went in 1939 to Paris, he made around thirty oil paintings for the Turkish pavilion at the New York World's Fair asked by his close friend Abidin Dino.

His lifetime in Paris passed with alcohol dependency, mental alienation and cognitive dissonance. He fell in love with the female Turkish painter Hale Asaf without being reciprocated. He was put in hospital again for two months, but during this time he never suspended painting. French model Dina Vierny saved him from being deported. In 1954, Fikret Mualla opened his first exhibition in Paris. He became friends with many renowned artists including Pablo Picasso. He later would sell a signed photo of Picasso for one bottle of wine. Following his second exhibition, he was hospitaled again.

By now, he was notorious as a drunkard and mad man, but he started to be respected as a painter. During this time, a collectioner, Madame Angles, took him under her patronage. This enabled him to earn his living by painting and selling his works. However, ill-starred, Fikret Mualla was paralyzed in 1962. He moved to Reillanne, a village in southeastern France, as cirrhosis supervened. By May 1967, he was put in a clinic after nervous disorders escalated. In the morning of July 20, Fikret Mualla was found dead in his bed. According to his will, his remains were brought to Turkey and were interred at Karacaahmet Cemetery in Istanbul.