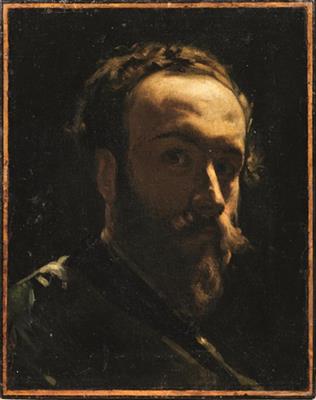 Federico Faruffini (1833–1869) was an Italian painter and engraver of historical subjects, in a style that combines the styles and themes of Realism with the diffuse outlines and lively colors of Scapigliatura painters.


Born in Sesto, a commune now inside the metropolitan area of Milan, he initially trained with Trecourt in Pavia. He befriended Tranquillo Cremona and accompanied him to Milan and Venice. He traveled with Giovanni Carnovali. In the 1864 exposition at the Brera, he submitted a watercolor, Coro della Certosa di Pavia, and four oil canvases: Scholars of Alciato, an Annunciation, Cordello e Cunizza, and his Machiavelli and Borgia, which he both painted and engraved, and for which he received a medal in 1866. His Sacrifice at the Nile was painted for the 1865 exhibition. In 1867, at the Paris Salon, he was awarded a first prize medal for a paintings of Borgia and one of The death of Ernesto Cairoli.


Lack of recognition and financial difficulties is said to have led him to his suicide at age 38, in Perugia.