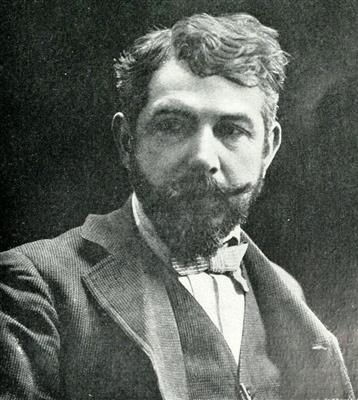 Ettore Tito (17 December 1859 – 26 June 1941) was an Italian artist particularly known for his paintings of contemporary life and landscapes in Venice and the surrounding region. He trained at the Accademia di Belle Arti in Venice and from 1894 to 1927 was the Professor of Painting there. Tito exhibited widely and was awarded the Grand Prize in painting at the 1915 Panama–Pacific International Exposition in San Francisco. In 1926 he was made a member of the Royal Academy of Italy. Tito was born in Castellammare di Stabia in the province of Naples and died in Venice, the city which was his home for most of his life.


Ettore Tito was born in Castellammare di Stabia (near Naples) on 17 December 1859 to Ubaldo Tito, a merchant marine captain and Luigia Novello Tito. His mother was Venetian, and when he was a small boy the family returned to Venice where he was to live for the rest of his life. He began his art studies at an early age, first with the Dutch artist Cecil van Haanen, who was to become a lifelong friend, and then at the Accademia di Belle Arti where he had been accepted at the age of 12 before he had even reached the legal age for admission. At the Accademia he studied primarily under Pompeo Marino Molmenti and graduated at the age of 17.


His first major success came in 1887 when his painting Pescheria vecchia a Venezia (a depiction of the old fish market on the Rialto) won great praise at the Esposizione Nazionale Artistica in Venice and was subsequently bought by the Galleria Nazionale d'Arte Moderna in Rome.


Tito exhibited widely, and his work was popular beyond his native Italy. His paintings were to be seen in each Venice Biennale from its inception in 1895 until 1914 and again in 1920 when the Biennale resumed after World War I. He won the Premio Città di Venezia (City of Venice Prize) at the 1897 Biennale and a Grande Medaglia d'Oro (Grand Gold Medal) at the 1903 Biennale. In 1909 an entire room at the Biennale was devoted to a retrospective of his work with 45 paintings and a bronze sculpture of Pegasus on exhibit. (Entire rooms devoted to his work were also presented at the 1922, 1930 and 1936 Biennali.)


Abroad, Chioggia won a Gold medal at the 1900 Exposition Universelle in Paris and was subsequently purchased by the Musée du Luxembourg. His painting, La gomena (The Cable), won the Grand Prize at the Exposition Universelle et Internationale in Brussels in 1910, and in 1915 he was awarded the Grand Prize in Italian painting at the Panama–Pacific International Exposition in San Francisco. An exhibit of 18 of his canvases was also held in Los Angeles in 1926, the year in which he was made a member of the Royal Academy of Italy.


While his earlier paintings were largely depictions of the people, everyday life, and landscapes of Venice and the Veneto, after 1900 he increasingly turned to mythological and symbolic subjects inspired by 18th-century Venetian painting, both for his oil paintings and for the murals he painted at the Villa Berlinghieri in Rome and the Palazzo Martinengo in Venice. By the late 19th century, he was also in demand for his drawings and sketches which illustrated several British and American magazines, including The Graphic, Scribner's Magazine, and Punch.